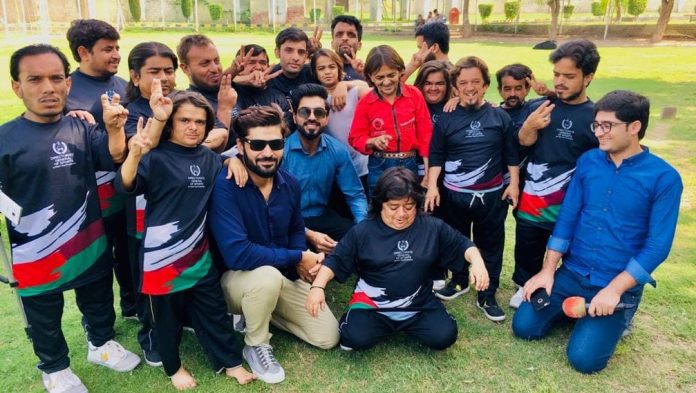 PESHAWAR— People with low height in Khyber Pakhtunkhwa province increasing but these people have no opportunity for jobs, these people look like a teen ager but most of them round about 35 years old. Said Actor Zardad BulBul , a chief coordinator of low height people in Peshawar.

More than 30 people from different parts of the province participated first time in 28 national games for people with different abilities games, which was scheduled from 25 to 27 in qayyum stadium Peshawar. These games organized by sports directorate kpk for the welfare of special people, the persons who have disabilities.

Zardad khan one of them who participated first time with low height people games, he belongs to Adrema, a village near to Peshawar. 40 years old Zardad working as actor in ptv , but now a day jobless , he have no opportunity for any jobs because of his low height. Zardad along with other brother and his son participated in these games.

According to Zardad I and my brother have low height and people from our village didn’t recognized as human, they society call us elf, it’s difficult for us to live with difficult physical structure. Even in school times my college in class tease me and tortured my physical appearance. That’s why I didn’t complete my education and start acting in different drama, so now people recognize as actor, but still I can’t move around the city as common man.
Zardad compiled names of low height people from Khyber pukhtoonkhwa province and now he have 250 friends from five different district, these people have low height , one of them is PHD , but due to low height he have no jobs.

Only 15 low heights people live in district Peshawar while rest of them from karak distrct, swabi, Nowshera district. The family member of these low heights are normal structure. No body know the reason why these people have low structure.

Zardad Khan Bulbul belongs to Peshawar while Rehmat Khan from karak district are friends and they trying to catch opportunities for these low height people.

It’s difficult for us to control these people, because most are very active, they want to work, act and play like other people but common people harass us because of our physical appearance.

Rehmat khan work in youth department Khyber pukhtoonkhwa as class four employ, he was recruited in special quota for disable persons. According to Rehmat khan low height people are sensitive people of society , he said the most people abuse us that’s why low heights people live with different pressure , pressure in home , society , work place make use more sensitive .

According to Rehmat all low height people have families, even most of them married with normal women’s, but due to lack of education we can’t move with our wives openly in Pakistani society.

The low heights structure people are most active in sports, their physical appearance is difference, that’s why during special games even disable people trying to make selfie with these people.

According to Zardad khan we have lack of opportunity of jobs , only 50 female are registered with our organization , but these low structure female have no opportunity nor they get married like normal female , so if government of Pakistan provide funds for these people then they lives like other people.

One amazing things which noted during these low heights people that they are friendly and unite everywhere .These elf born in poor families, that’s why they have lack of opportunity of jobs.