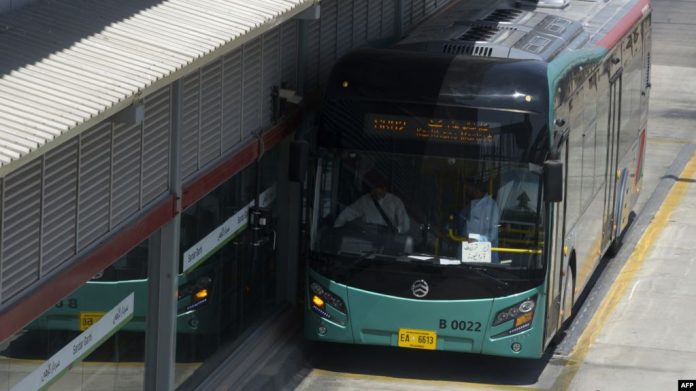 PESHAWAR: Contractors have suspended civil works on the remaining portion of the Peshawar Bus Rapid Transit project following the imposition of more than Rs1 billion fine over their failure to meet the deadline.

The bus service was launched on Aug 13 but work on bus depots in Hayatabad and Dabgari Garden and other facilities hasn`t been complete d yet.

The service has been suspended due to fire incidents in four buses.

Sources said that the the contractors had signed a settlement agreement with the Peshawar Development Authority (PDA), the project executing agency, at the end of last year binding them to complete work on three reaches in six milestones, the 120 days period set for completion of work.

`The three contractors was to complete all work by April and handed it over to the civic agency. However, they failed to meet timelines forcing the PDA to impose liquidated damages over Rs1 billion on them, an of ficial told Dawn.

He said the contractors had failed to complete the façade-to-façade construction on both sides of the BRT corridor, landscaping, pedestrian bridges, electromechanical works and finishing at the Hayatabad bus depot and finishing at the Dabgari Garden bus depot, and staging and park and ride facilities at the Chamkani bus depot.

The of ficial said the contractors worked slowly until August before stopping work on the project altogether.

He said the Hayatabad bus depot was likely to take four to five months to be ready, while work on the remaining portions would finish in two months after its launch.

The official said following the failure, the executing agency decided to impose fine of over Rs1 billion on contractors.

He said the contractor was demanding deadline extension saying that they were unable to complete the project on time due to Covid-19 pandemic.

The official said both sides were trying to resolve the disagreement.

Contractor Aamir Lateef denied both delay in work and imposition of fine and insisted that the execution of the assigned tasks was under way.

However, PDA director general Syed Zafar Ali Shah confirmed the imposition of liquidated damages on contractors and said contractors had failed to complete work on the BRT project`s of f-corridor portions and buildings by the April 15 deadline.

He said contractor had to address deficiencies and it was up to the competent authority to decide the matter. Mr Shah said the contractors had sought deadline extension over the Covid-19 pandemic.

`Work on the project has been stopped, he said.

Work on BRT project was launched in Oct 2017 with the bus service set to begin in April 2018. However, the deadline was missed.

The project was finally launched on Aug 13. However, the services were suspended after the the broke out in at least four buses in around a month.

Also in the day, spokesman for the provincial government Kamran Khan Bangash tweeted that technical malfunctions in BRT buses had been identified and work on their resolution was under way.

In the tweet, he said defective components were being flown in for immediate replacement.

`The buses will start operating in a month or so with technical experts making the swap and testing the vehicles in detail.

Mr Bangash said a team of 20 experts was engaged for the rapid resolution of the issue with 11 working on different sites.

The repair has no financial implications on the provincial government as the concerned company was bound by contract to provide the services, he said.