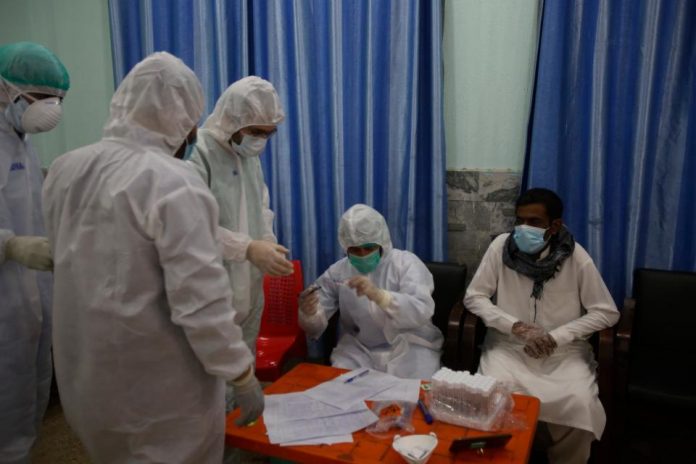 ISLAMABAD: While Pakistan’s tally of the novel coronavirus cases crossed the 200,000 mark, the National Command and Operation Centre (NCOC) did brainstorming to find reasons for a sudden decline in the number of daily tests and new cases during the past one week.
The country reported 3,709 cases and 94 deaths over the past 24 hours, taking the national tally of cases to 201,414 and fatalities to 4,098.
The NCOC meeting, which was attended by the chief secretaries and health secretaries of all the provinces, compared the tally of tests conducted on June 21 and 26 and found that the number of new cases across the country dropped by around 40pc from 7,000 to 4,000 a day.
They discussed different factors such as testing, smart lockdown and awareness campaigns regarding precautionary measures that could have contributed to drop in the number of new cases. It was observed that the number of tests declined by 64pc in Sindh.
On June 21, it was observed, overall 30,520 tests for coronavirus were conducted across the country. Of them, 13,890 tests were held in Sindh, 9,598 in Punjab, 3,416 in Khyber Pakhtunkhwa, 2,545 in Islamabad, 707 in Balochistan, 247 in Azad Jammu and Kashmir and 117 tests were conducted in Gilgit-Baltistan.
On June 26, they noted, the number of Covid-19 tests dropped to 21,033 in the country. Of them, 9,353 were conducted in Punjab, 5,103 in Sindh, 2,913 in KP, 2,463 in Islamabad, 881 in Balochistan, 286 in AJK and 34 tests in Gilgit-Baltistan.
According to an NCOC statement, the Sindh health secretary informed the participants that the number of tests that declined due to some administrative reason would be increased in next two to three days. Other provinces also informed the meeting that the demand for Covid-19 test had reduced, as less patients were visiting hospitals. Some experts expressed concern over the emerging trend that people were preferring to isolate themselves at homes rather than getting tested.
The participants noted that the number of patients having symptoms of Covid-19 was on the decline, while people’s movement across Pakistan had been reduced due to the 542 lockdowns enforced in 20 cities.
Moreover, provincial officials also briefed the meeting about the implementation of precautionary measures in industries, markets, transport, courts, government offices, mosques and public places. They claimed that improvement was observed at most of the places.
Minister for Planning, Development and Special Initiatives Asad Umar appreciated the performance of all the provinces and field staff due to which the number of cases decreased across the country. “We need to ensure use of face masks and social distancing so that the deadly virus would be controlled. We are ready to provide more polymerase chain reaction (PCR) machines and testing kits as per their requirements,” he said.
Meanwhile, around 30,000 doctors, nurses and paramedics completed training under ‘WeCare’ programme, while 100,000 more healthcare workers will be trained to provide treatment to Covid-19 patients and ensure their own safety.