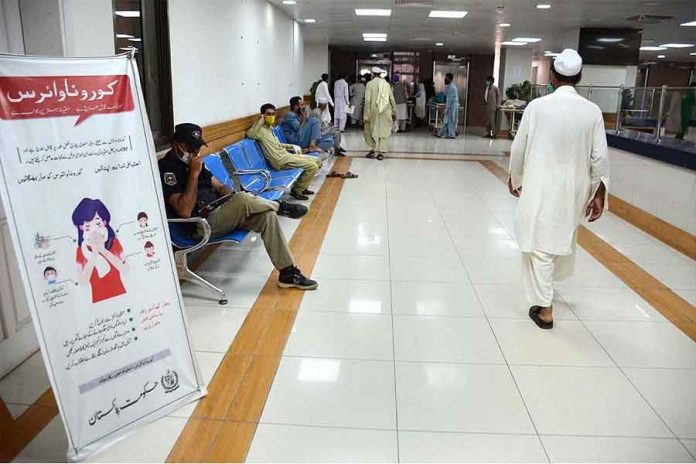 PESHAWAR: The death toll from the novel coronavirus in Khyber Pakhtunkhwa has reached 914 as 24 new deaths were reported on Saturday.
According to latest data shared by the KP Health Department, as many as 437 new cases were confirmed in the province during the last 24 hours, taking the tally to 25,380. The new infections include two persons who have returned through various international flights. Out of 24 new deaths, 10 have been reported in Peshawar, four in Nowshera, two in Swat, and one each in Mardan, Swabi, Haripur, Lower Dir, Bajaur, Bannu, Kohat and Kurram.
As many as 12,149 patients have recovered so far, including 345 during the last 24 hours.
Peshawar is still the most affected district from coronavirus in KP with 8,827 cases so far, including 222 during the last 24 hours, and 441 deaths, nearly the half of the total deaths in the province. As many as 4,677 people have recovered from the disease in the metropolis.
According to official data, Swat is the second most affected district with 91 deaths, Mardan has reported 49 deaths, Abbottabad has reported 38 deaths, Nowshera reported 38, Malakand reported 34, Bajaur reported 30, Kohat reported 27, Lower Dir reported 23, Swabi reported 20, Battagram reported 14, Upper Dir reported 13, Charsadda reported 12, Dera Ismail Khan reported 11 and Karak, Buner, Mansehra and Khyber tribal district have reported 10 deaths each. The death toll in other districts of KP is in single digit figure.
The districts of Tank, North Waziristan, South Waziristan, Lower Kohistan, Upper Kohistan, Torghar and Upper Chitral haven’t reported any coronavirus death so far, according to official data.
The Health Department said the KP government has added a capacity of 38 ICU and 194 HDU beds in the last two weeks for coronavirus patients across the province.
It said in a tweet that the KP government has planned to add 1,000+ ICU and HDU beds till August across the province.
Death toll from COVID-19 in Pakistan has mounted to 4,098.
The total confirmed cases of COVID-19 in Pakistan have reached 2201,414.
Of these, 78,267 have been reported in Sindh, 72,880 in Punjab, 25,380 in Khyber Pakhtunkhwa, 10,261 in Balochistan, 12,206 in Islamabad Capital Territory, 1,417 in Gilgit-Baltistan and 930 in Azad Jammu and Kashmir.
As many as 86,906 patients have recovered from the virus in Pakistan.