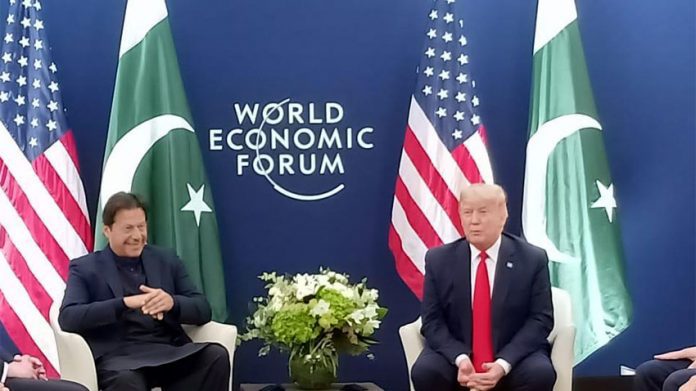 DAVOS: Prime Minister Imran Khan and US President Donald Trump have agreed to further strengthen bilateral relationship especially with respect to enhancing bilateral trade and investments.
The agreement came at a meeting between the two leaders on the sidelines of World Economic Forum in Davos.
According to a press release issued by Foreign Office, both sides discussed the situation in Indian Occupied Jammu and Kashmir.
The Prime Minister underscored the need for sustained US role to help resolve the festering dispute of Jammu and Kashmir without which lasting peace in South Asia will remain elusive.
President Trump reiterated his willingness to work on the Jammu and Kashmir dispute and help ease tension between Pakistan and India.
The two sides exchanged views on the way forward regarding the Afghan peace and reconciliation process.
Discussing the evolving situation in the Middle East and the Persian Gulf, the Prime Minister apprised President Trump of Pakistan’s efforts for de-escalation in the region.
He also emphasized that all sides should exercise maximum restraint and utilize diplomatic means to reduce tensions and resolve issues.