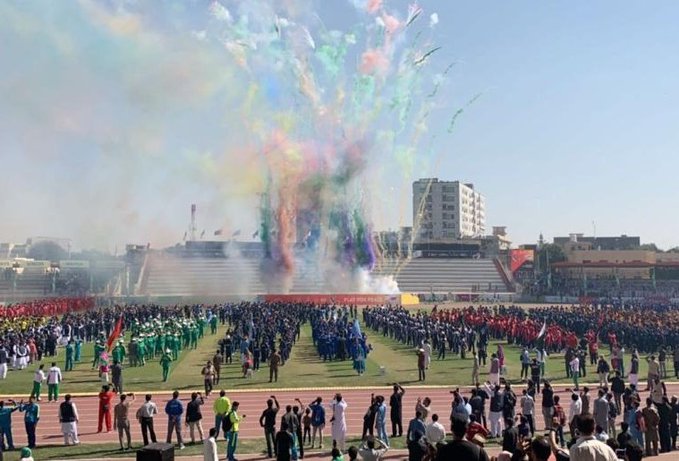 PESHAWAR—- The historical and most awaited 33rd National Games got under way amidst great fun and enthusiasm with more than 10,000 athletes are taking part in 32 male and 27 female.

The Games is costing cost Rs 220 million which aimed at to portray a soft image of the Khyber Pakhtunkhwa in rest of the world. “We are peace loving and believe in peace and through this mega national games, we are giving a message of peace to the rest of the world,” Muhammad Atif said in brief talks soon after arrival.

The Games started with the recitation from Holy Quran by  Nayyub Rasawar Shah, followed by a melodious Naat Sharif by Rumasa and Kashmala. Soon after the teams participated in a Smart March Past, followed by a well-prepared National Anthem and thus the Torch that cross almost 2480 kilometer entered into the main area.

There was a match-less para-jumping by the troopers of the Army Para-Military Club who jump from the 10,000 feet and nicely landed into the main ground of the Qayyum Sports Complex. International fame Salman of Jazba Janoon presented two melodious national songs Dil Dil Pakistan, Ya Jazba Janoon which turned the whole complexion into a melodious one. The children of the Agriculture Model School also presented a good number of “Is Parcham ke Sai Talay Hum Aik Hain” which largely enjoyed by capacity crowd present on this occasion.