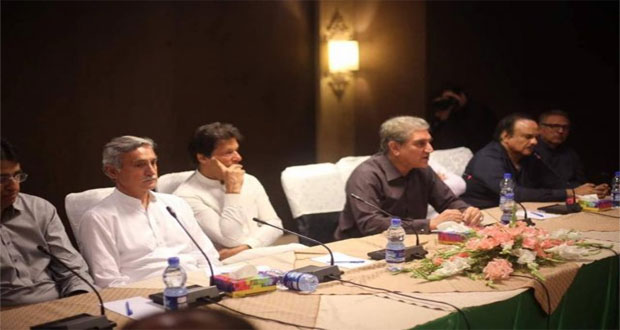 ISLAMABAD: Core Committee of Pakistan Tehrik-e-Insaf (PTI) has rejected the demand of resignation of Prime Minister Imran Khan by opposition parties. The meeting appreciated untiring efforts of PM Imran Khan for the progress of the country.

The core committee of PTI also rejected demand of re-elections in the country. The meeting decided that unconstitutional demands of opposition would not be entertained.

By such tactics opposition is trying to stop accountability in the country. The members noted that opposition was allowed to hold protest in federal capital by accepting their constitutional right.

Moreover, PTI core committee decided that government would take action and law would be implemented if marchers breached the agreement. The meeting condemned the language used for national institutions and statements regarding arrest of PM Imran Khan.

It was discussed in the meeting that Pakistan is progressing due to the efforts and sacrifices by these institutions and it was due to these institutes that peace prevails in the country today.

The core committee also hailed the efforts of Special Assistant Firdous Ashiq Awan for representing government’s stance in an effective way. PM directed other leaders to support Awan in promoting party’s stance in such conditions.

Interior Minister on the occasion said government would not let protestors affect rights of citizens of federal capital.

On the other hand sit-in protest led by the Jamiat Ulema-e-Islam-Fazl (JUI-F) in Islamabad enters its second day.