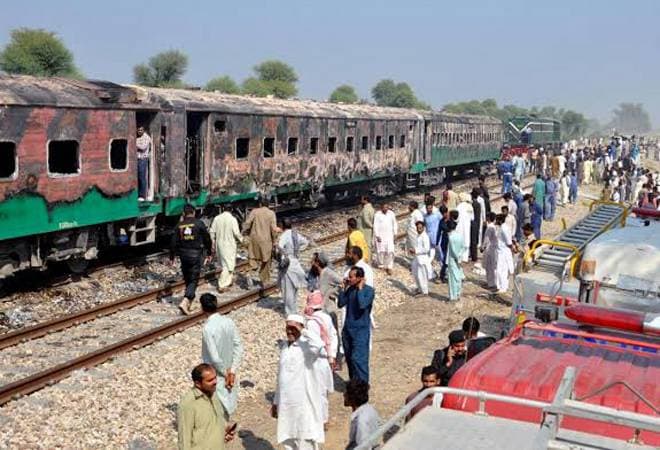 PESHAWAR: At least 73 people lost their lives and many others were injured when fire erupted in a passenger train in Rahim Yar Khan district of Punjab on Thursday.
Tezgam Express was on its way from Karachi to Rawalpindi when a gas cylinder carried by a passenger exploded, which caused massive casualties in the train. The fire destroyed three of the train’s carriages, including two economy class carriages and one business class carriage. More than 200 passengers were travelling in the three carriages at the time of the incident.
Punjab Health Minister Dr Yasmin Rashid said at least 40 people, including women and children, were injured in the inferno and some of them were in critical condition due to which the death toll might increase further.
The injured people were shifted to District Headquarters Hospital Liaqatpur and Bahawalpur. Sources said some of the bodies have been identified, while unidentifiable bodies will be identified through DNA tests.
Sources said some of the passengers saved their lives by jumping from the fast moving train. However, they received critical injuries while doing so.
Minister for Railways Sheikh Rashid Ahmed said some passengers were carrying cooking stoves with them and they were preparing breakfast in the moving train when the incident occurred. He said the oil from the stoves added fuel to fire. He confirmed that most of people who jumped from the moving train lost their lives and others sustained critical injuries.
The train bogies which caught fire were severely damaged and were separated from the train.
Sheikh Rashid announced Rs1.5 million each compensation for the families of the deceased in the incident and Rs0.5 million for each injured.
The Pakistan Railways Chief Executive Officer Aijaz Ahmad said the train schedule will not be affected by the Rahim Yar Khan tragic incident.
President Arif Alvi and Prime Minister Imran Khan, PPP Chairman Bilawal Bhutto Zardari and other leaders expressed deep grief and sorrow over the loss of precious lives in Tezgam Express incident. They prayed that Almighty Allah rest the departed souls in eternal peace and grant courage to the bereaved families to bear the loss with equanimity.
The prime minister ordered an inquiry into the incident and directed the authorities concerned to provide best possible medical treatment to those injured in the incident.