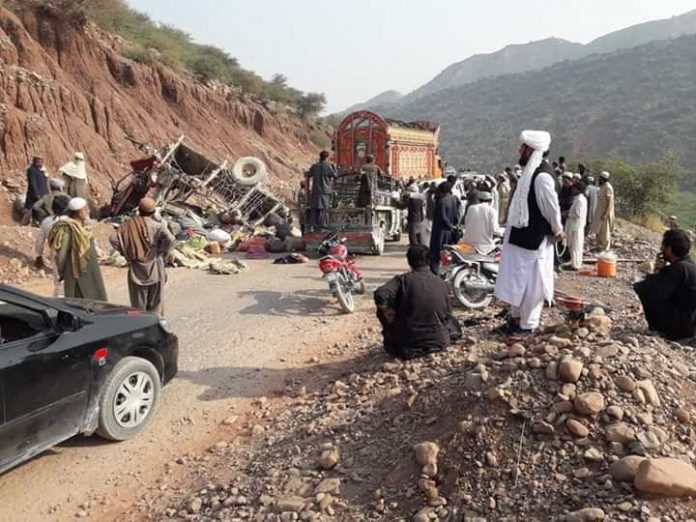 DERA ISMAIL KHAN: At least six people lost their lives and 23 others have been injured in road accidents in Dera Ismail Khan and Torghar districts of Khyber Pakhtunkhwa.
In DI Khan, a tractor carrying a gypsy family and its luggage overturned in Sarobi area of Drazinda tehsil on Wednesday. Three people of a family, including two women, lost their lives in the accident, while 11 others were injured.
The administration said the injured persons were shifted to hospital. The local people helped in the rescue activity.
Earlier, three people, including two women, were killed and another 12 were injured when a passenger jeep plunged into a ravine in Torghar on Tuesday.
The jeep was travelling to Bakot village from Judbah when the driver lost control over it while negotiating a sharp turn. The vehicle skidded off the road and plunged into the ravine.
District Police Officer (DPO) Janis Khan confirmed the incident and said the injured people were shifted to hospital.
Policemen arrived at the scene and shifted the injured to the Civil Hospital in Judbah from where almost all the injured were referred to the Ayub Medical Complex hospital in Abbottabad.
Road accidents mainly happen in KP due to poor condition of roads and untrained drivers.
Last week, six persons of a family lost their lives in a traffic accident in DI Khan.
Dr Naseem, who was appointed at District Headquarters Hospital, was travelling in a car along with his mother, two sisters, wife and two children from Miakani area to DI Khan city on Monday night when his vehicle collided with a bus in Pasha Khani area.
Police said Dr Naseem, his two sisters, mother and two children died on the spot, while his wife was critically injured.
Two brothers were killed in a firing incident over a domestic dispute in North Waziristan tribal district on Wednesday.
Local sources said the incident happened in Narikot area of Miranshah tehsil where a man shot dead his son-in-law and his brother. The sources said the daughter of Aleem Ramail was left her husband’s house and was in her father’s house, while her husband had entered engagement with another girl and was planning to enter second marriage soon. Sources said Aleem was perturbed over the issue and on Wednesday morning he allegedly shot dead his son-in-law and his brother.
Police have arrested the accused.