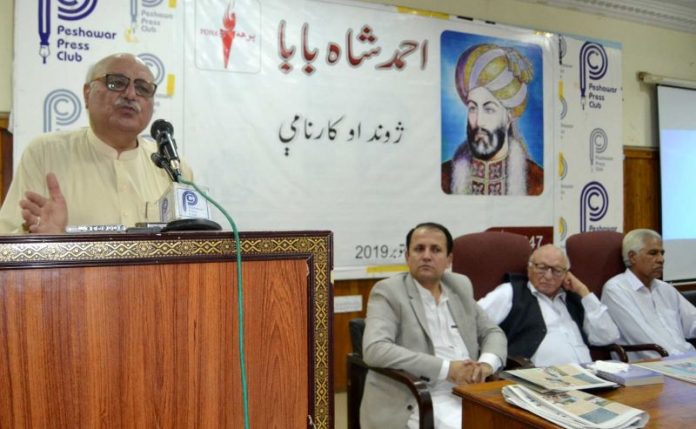 PESHAWAR— Paying glowing tributes to the great Pushtoon leader, ruler of Indo-Pak Sub Continent and founder independent state Afghanistan, Ahmad Shah Abdali, the intelligentsia and Civil Society Organisation networks, demanded of the government to place his portraits in all government installations, especially in fortresses and museums throughout the country.

A ceremony arranged by Poha, a civil society network, striving for promotion of education and awareness activities amongst the Pushtoons throughout the world was arranged in connection with 247th death anniversary of great Ahmad Shah at Peshawar Press Club on Wednesday. The ceremony was largely attended by intellectuals, poets, scholars, journalists and representatives of different political parties. Beside others, the participants were addressed by

Through another resolution, the participants have demanded of the government to help in early and amicable resolution to long standing Afghan conflict and east restrictions against Afghan nationals visiting Pakistan for health, education and other socio-economic purposes. The participants believe that Pakistan and Afghanistan are not only each others neighbours but its millions of people are linked with each others in unbreakable relations. Cordial, friendly and trust worthy relations between the two countries could help in early addressing of almost socio-economic, administrative and economic issues ahead to Islamabad and New Delhi. In this respect, it suggested to re-visit the Visa and Passport compulsions for people residing on both sides of Pak Afghan Border and ensure re-opening of all traditional crossing points like of recent past.

The speakers have highlighted different aspects of Ahmad Shah Abdali life and his method of conquering almost of sub-continent as well as his dealing with the people from different tribes and communities. They reminded that it was great Ahmad Shah who had had made another boost to traditional Jirga’s in Pakhtoon society by enabling all tribes and communities of Afghanistan for having a key role in establishment of governments and handling of serious regional and international issues through Loya Jirga. Most recently, even the US led allies, China, Russia and Pakistan have also recognized the effectiveness of traditional Loya Jirga’s.

It was decided that Poha and participants from different groups and parties would celebrate the death anniversary of Great Ahmad Shah every year and would initiate an organized struggle for creating awareness amongst the Pushtoons throughout the world. 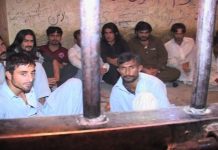