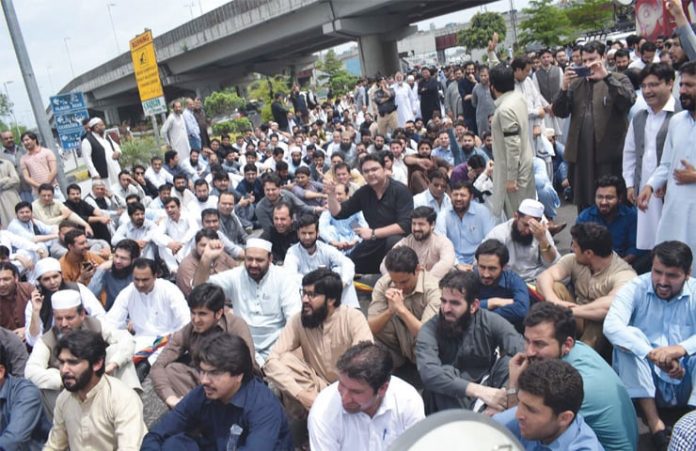 PESHAWAR: Doctors and paramedic staff once again held protests against the launch of the district and regional health authorities in the province on Thursday.
The protest started at outside the Lady Reading Hospital in Peshawar where doctors and other KP health department employees arrived in the morning, later on, they marched toward the Khyber Pakhtunkhwa assembly where they protested and chanted slogans against the provincial government’s new health policy.
On this occasion, GT Road was completely blocked due to which vehicles coming to Haji Camp Adda or Hayatabad have faced severe problems. Doctors Sources said that today they will march to Islamabad and record their protest there too to press the government for their demands.
It is to be noted that other doctors and health department employees are protesting against the law of DHA and RHA for the past 16 days and all hospitals, except the emergency services, in Peshawar, are suspended due to which Patients are experiencing severe problems.
It is also to be remembered that the police had charged batons on protesting doctors in LRH on September 17 in which a number of doctors were while several doctors were detained. Doctors believe that hospitals are being privatized by the aforementioned law or authority and their protest will continue till the return of this decision.
Last week, the Peshawar high court has directed the doctor to resume their regular duties and also ordered the provincial government to release all detained doctors. However, doctors have not yet complied the order. The KP government health department is also not ready to budge from its stance.
The KP secretary health has said that they are now thinking about other alternatives including the recruitment of 400 doctors on ad-hoc bases to cope with the situation created due to protests of doctors against new health policy.
The health secretary announced that within a few days, posts will be advertised through national dailies. The secretary also informed that KP public service commission has also informed them that the recruitment process of 786 new doctors on permanent bases has already been completed.