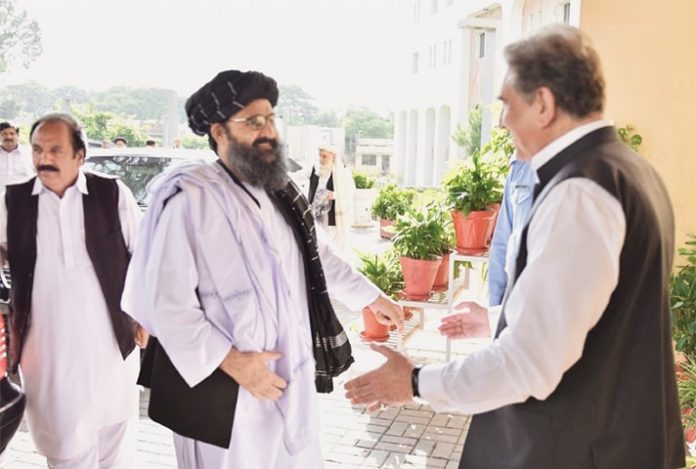 PESHAWAR —Whatever might be its apparent stance regarding visit of a 12-member Taliban delegation into Islamabad but internally Pakistan seem under tremendous pressure of US and other members of international community at this crucial stage. And Doha Qatar based Taliban leaders are visiting Pakistan at the time when the US Special Envoy Dr. Zalmay Khalilzad also landed at Islamabad. Now all these three stakeholders would definitely discus ways and means for resuming of peace talks, concluded at 11th hours early in previous September. But reaction of Afghan government over awarding of state protocol to Taliban leaders couldn’t be undermined.

Not only US but Afghanistan also alleges involvement/support of Pakistan to all those Afghan Taliban militants, making claims for each and every violent/terror act in Afghanistan. In the wake of existing global-regional strategic and political atmosphere, Pakistan is aheading towards isolation, therefore Afghanistan reaction on Taliban visit, “interference in internal affairs of Afghanistan” could get endorsement at international forums, which might be harmful to its (Pakistan) interests.

Most recently on the eve of Presidential elections on September 18, 2019 situation remain calm compare to pre—polls campaigning and arrangements. In fact, the US led allies had convinced Pakistan to prevent Taliban of violence on election days otherwise it would definitely affect position of Pakistan, which is making attempts of drum up International community support on the issue of Kashmir. And Pakistan responded very positively when overall electioneering process completed comparatively peaceful.

Now when the Taliban delegation reached in Pakistan, the Afghan government reacted with a very brief but comprehensive statement, terming “awarding of state protocol to Taliban leaders, naked interference in internal affairs of Afghanistan.” For the first time in history since 1947 ( when Sub continent disintegrated into Pakistan and India), Afghanistan is not only remain “silent” on the issue of Kashmir but even its leadership extended support to India after its diplomatic mission refusal to become signatory to Pakistan resolution in the UN General Assembly session.

Through social media, Pakistani authorities, especially those associated with the secret agencies, dealing and healing affairs across the border in Afghanistan, are earning criticism by Awarding State Protocol to Taliban delegates head Mullah Abdul Ghani Baradar who after over eight years imprisonment, torture and interrogation, made free from Karachi on October 24, 2018 last. It seems repetition of what happened with founder of Bangladesh Sheikh Mujeeb Ur Rahman who was given Red-Carpet and rousing welcome upon his first ever visit as Prime Minister to Lahore in 1973 last. In the wake of independence struggle, Sheikh Mujeeb remained prisoner in Rawalpindi Adyala Jail during 1971 War. And even before independence of Bangladesh, Sheikh Mujeeb was declared/accused as a Traitor.

In fact, Mullah Abdul Ghani Baradar was approached by former President Hamid Karzai in 2004 and 2009 simultaneously in connection with Reconciliation. And on such grounds, Mullah Abdul Ghani when made attempts to consult his Karachi based colleagues, he was arrested by secret agencies. At that time, Pakistani militant commander namely Latif Ullah Mehsud who was in detention of Afghanistan was arrested by US troops when he was entering Pakistan at Torkham. Latif Ullah Mehsud was making attempt to talk with his relative and the then TTP chief Hakim Ullah Mehsud in according to Afghan government request to stop and let come on table to resolve all issues through dialogues. Ex-President Hamid Karzai made ager and infuriated by arrest of both Ghani Baradar and Latif Ullah Mehsud, changing his mind. In the wake of such arrests, Karzai started accusations against both Pakistan and US and challenging its sincerity regarding ending of terror in the region and resolving of Afghan conflict.

So far the Taliban delegation have held detail talks with high ranking Pakistani high ups included Prime Minister Imran Khan, Foreign Minister Shah Mahmood Qureshi, COAS Gen. Qamar Javed Bajwa and ISI Director General Lt. Gen. Faiz Hameed. But they would remain in Islamabad for couple of days and they would definitely meet the US special envoy Dr. Zalmay Khalilzad. But this meeting would remain too much secret in the light of President Trump’s declaration that Taliban first declare ceasefire. Compare to recent past, there is an “UNDECLARED CEASEFIRE” in Afghanistan since September 28, 2019 (the Presidential Election Day.”

In over one-year US –Taliban peace talks, the Afghan government was neglected and on such grounds, President Ashraf Ghan had time and again opposed any sort of deal between the two. And little before US President Donald Trump’s tweet messages, cancelling his meeting with Taliban leaders in Camp David for signing of the peace deal, President Ashraf Ghani had refused to visit. Now all three sides are discussing ways and means not only for resuming of the peace process but also the procedure either to make agree/silent President Ashraf Ghani or to make him part of proposed peace truce. Despite worst kind of violence and terror threats, President Ashraf Ghani government demonstrated its popularity in recently held Presidential polls when over three hundred thousands people have turned to deaf ears threats if suicide and bomb attacks and turned to polling stations. Now again the situation seems too much unfriendly for no other than Pakistan and its brain child Taliban, calling them ad Emirate Islami Afghanistan.