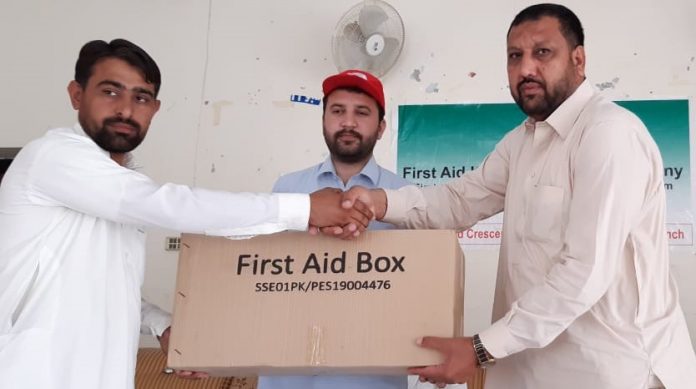 Dozens of representatives of different schools from Jamrud, Bara and Landi Kotal tehsil of Khyber tribal district have received the first aid kits being given by PRCS Merged Areas HQ. The distribution was made in 2nd phase after the capacity building trainings of first aid being given to students of government, private and religious seminaries.

Speaking on the occasion as chief guest, political tehsildar, Naik Muhammad in his address to participants said the administration will fully support the organization in carrying out its humanitarian and welfare activities in the district. He also offered his full patronage in installing a container for first aid response during emergency situation.

He applauded the organization’s role in providing relief to vulnerable community in disasters and asked the relevant representatives to continue their humanitarian services and other programs for betterment of society.

Assistant Director Youth and Volunteer Program, Riaz Dawar in his address shed lights over role and mandate of the organization and saying it (PRCS) works in entire Pakistan and it has been established under parliament act. About volunteers force in merged areas, he claimed the merged areas headquarter has about 7,000 volunteers who who during natural and manmade disasters are ready for taking their active part in responses.

“The organization has trained about 600 students among them 25 females in first aid across tribal areas since January to August, 2019” said First Aid Coordinator Iftekhar Ahmed while speaking on the occasion. He elaborated the organization has taken the initiative to give tangible items to schools and seminaries in shape of first aid kits.

He informed the male and female students, police, community members, teachers, journalists, special persons, orphans are among the beneficiaries who had been given first aid trainings. The first aid kits provided to schools have become their properties who can use it for minor incidents in the premises of institutions, he added.

It is to be mentioned here that the organization had distributed first aid kits in Mohmand and Khyber and will also do the same in other tribal districts including South, North, Kurram, Orakzai, Bajaur and Frontier Region Tank.