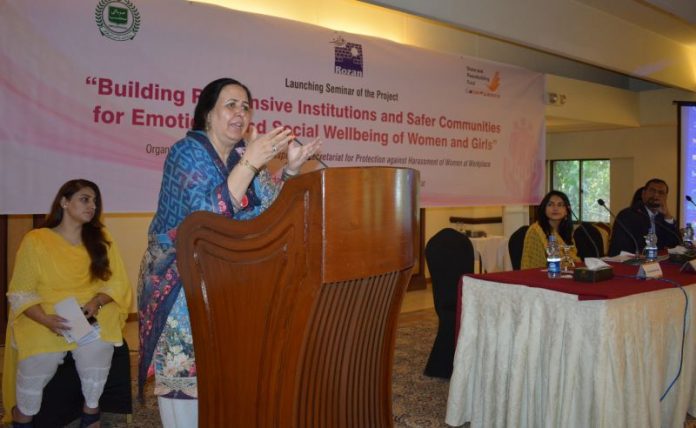 PESHAWAR— The Khyber Pakhtunkhwa Ombudsperson Secretariat for the Protection of Women against Harassment at workplace with Rozan and World Bank launched the project “Building Responsive Institutions and Safer Communities for Emotional and Social Well-being of Women and Girls” for Peshawar.

Ms. Rukhshanda Naz, Ombudsperson for protection of women against Harassment at workplace urged communities to stand with relevant government departments to end violence against women and girls. She added that with public-private partnership, they can limit burden on institutions like Police and majority of cases will be resolved at the grass root level.

Ms. Uzma Quresh Social Development Specialist (Gender) from World Bank explained about World Banks’ various projects with KP Government. She told the participants of the event that World Bank is keen to take care of women empowerment in all of its projects and look forward to further strengthen the human rights in Pakistan. WB is working to further strengthen the mechanism to address the gender based violence in KP through digitalization of GBC cases data.

Mr. Babar Bashir Managing Director Rozan elaborated about the contribution of Rozan towards addressing the issue of GBV in Pakistan and in KP specifically. He further added that GBV issue is not the issue of women only. It affects society in a multiple way and multiple segments of the society. It needs to be addressed at household level so attitudes of general public need to be changed. Later Ms. Fouzia Yasmin expounded about the Project “Building Responsive Institutions and Safer Communities for Emotional and Social Wellbeing of Women and Girls”.

The second session of the seminar presided by Ms. Riffat Sardar Chairperson KPCSW. Mr. Hafiz Monim explained in detail about the initiatives taken by SWWD in KP. He appreciated government’s will t appoint the ombudsperson for women harassment cases and hoped that cases of women harassment will be better and quickly handled. He further added that bill for domestic violence will be passed soon in KP.

Mr. Maqsood Ali Secretary Directorate of Human Rights stressed upon the need of coordinated effort for stakeholder for dealing cases of violence against women and girl. He hoped that financial resources will be allocated for dealing such and cases but absence of law on domestic violence becomes a great hurdle for directorate to respond. Syed Sarfraz SSP Coordination Peshawar told the audience that reforms in KP police bridge the gap between police and public. The image of police needs to further strengthen among masses and conducive environment for men and women in police stations is the need to current time.

Ms. Riffat Sardar concluded the seminar by highlighting the urgent need to capacity building of service providers to women facing violence against them as well as the coordinated effort of all the stakeholders including government departments, civil society organizations and communities to empower women and bring them in the mainstream development.

The seminar was attended over 80 men and women representing various walks of life.