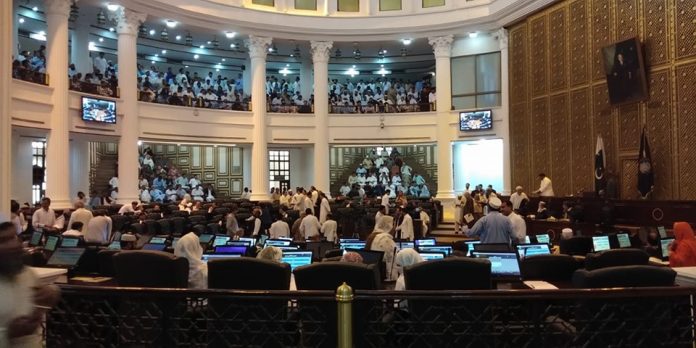 In the debate, five lawmakers that include two from MMA and one each from PPPP, PTI and ANP were participated in the discussion that lasted for an hour and 40 minutes.

Shoukat Yousafzai said that we fully support Kashmiri people in their right of self-determination. He said the Pakistan is not being isolated as we have full support of China over Kashmir and other regional issues.

He said that all the political entities of the country are united over Kashmir adding our joint efforts are needed in this connection.

Earlier leader of opposition, Akram Khan Durrani said that opposition and treasury are on the same page and condemned the Indian aggression in occupied area. He said that we support our Kashmiri brethren in this hour of need and distress.

He suggested convening All Parties Conference to deliberate the situation in Kashmir adding that we must shun difference and unite over the issue.

Parliamentary leader of ANP, Sardar Hussain Babak we should muster the support of comity of nation over Kashmir issue. He said that government should revisit foreign policy to avoid war and project the issue at international forums properly.

Naeema Kishwar of MMA and Ahmad Karim Kundi also spoke on the occasion.

Apart from that, the assembly also adopted another resolution demanding to set up a Medical Care Centre in the premises of KP Assembly and witnessed introduction of three government bills during third sitting of eighth session requisitioned by the Opposition.

During question hour questions, the house took up five 15 questions while eight questions were lapsed due to absence of the concerned members. While the two question were withdrawn by the Nighat Orakzai in protest against minister for education Zia Ullah Bangash’ miss behavioue with opposition members when they asked for inquiry in alleged posting and transfer of teachers appointed on dedicated posts. In addition, the lawmakers asked four supplementary questions.

Additionally, Minister for Information responded to two Calling Attention Notices (CANs). These notices urged the government to authorize Inter-Board Committee of Chairmen (IBCC) Regional Office in Peshawar to provide Equivalency Certificate to A-Level and O-Level students and ensure legislation against child abuse. These CANs were sponsored by PTI lawmakers.