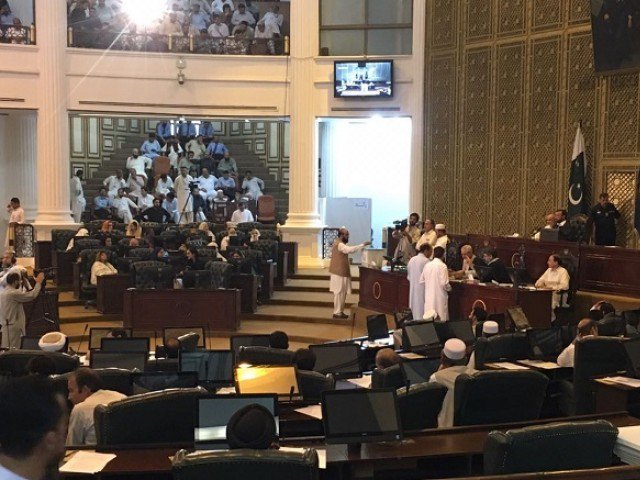 PESHAWAR— Media persons on Wednesday boycotted the Khyber Pakhtunkhwa assembly proceeding in protest over not taking action against the employees of Bus Rapid Transit (BRT) for manhandling media teams during BRT coverage.

The journalists staged walked out of the assembly hall soon after its proceeding started after recitation from Holy Quran.

On the directives of Speaker Mushtaq Ahmad Ghani, Minister for Finance Taimoor Salim Jhagra and MPA Fazle Elahi hurriedly rushed towards the protesting journalists in order to convince them to end their boycott. However, the journalists stuck to their decision of boycotting the session and moved out of the assembly precincts.

This is a serious issue and unless the government shows some inclination to initiate action against BRT employees, journalists will not attend the session.

The media persons said that three day ago the Peshawar Development Authority (PDA) has initiated inquiry into manhandling of journalists by staff of Bus Rapid Transport (BRT), seeking report within three days pointing responsible of the incident but did nothing till day.

Its merit a mention here that Provincial Minister for Information Shaukat Yousafzai taking notice of the matter, sought an inquiry report of the incident in three days on Wednesday.

The minister directed Director General Peshawar Development Auhtority (PDA) to take immediate action against staff of the BRT project who had been involved in manhandling of media team which was covering the BRT project and submit a report within three days.

Shuatkat Yousafzai said media was completely free and there was no bar on it to go anywhere for coverage, adding it was shameful indeed that officials of certain organizations resort to victimization of media men to hide their incompetency.