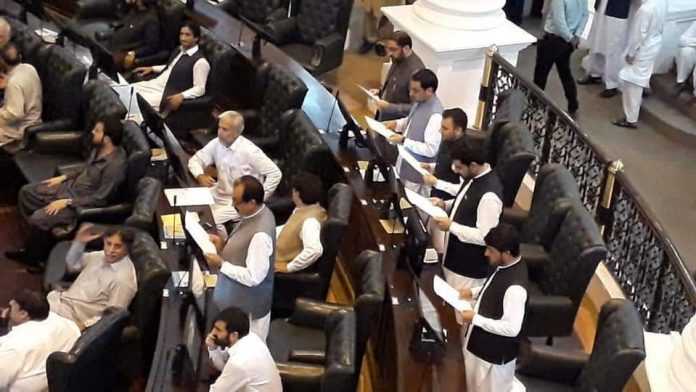 PESHAWAR— Nineteen newly-elected members, who won the election of provincial assembly held last month in merged tribal districts, took oath as members of the Khyber Pakhtunkhwa assembly during the assembly on Tuesday.

The oath taking ceremony of the newly elected MPAs has completed the process for the first-ever, directly elected representatives from the former tribal areas in the provincial assembly.

Those who took oath are including 16 MPAs elected on general seats, two out of four on women reserved seats and one for minorities.  Pakistan Tahrik-e-Insaf (PTI) and Balochistan Awami Party has nominated Ayesha Mohmand and Baseerat Bibi respectively for two vacant women reserved seats and has submitted their nominees with the Election Commission of Pakistan days earlier. The ECP would public the list of finalists on September 11 after which they would take oath as members of provincial assembly.

In the historic July 20 elections in erstwhile Fata, ruling PTI had won five out of seats, JUI-F had grabbed three while the Awami National Party (ANP) and the Jamaat-e-Islami had secured one seat each. The remaining six seats out sixteen were bagged by independents. Of these, two had decided to side with the ruling party while the remaining three opted to join the Balochistan Awami Party (BAP). While Pashton Takhafuz Tehreek backed Mir Kalam Wazir who won as independent didn’t join any party and remained independent.

The PTI secured two seats out of four reserved seats for women while one each was bagged by the JUI-F and BAP respectively. While the alone minorities seats went to PTI.

The strength of the KP assembly would reached to 145 after two remaining two female lawmakers took oath as members of the provincial assembly.

The CM added that it was a very difficult task to merge tribal districts with the province but the PTI government has made it possible and overcome all challenges. CM assured that the government is with the newly elected MPAs to work for the uplift of tribal districts irrespective of party affiliation.

The leader of opposition in KP assembly Akram Khan Durrani welcomed the newly elected MPAs and said that it is a historic day for the people of the province. Durrani in his address on the floor of KP assembly said that the infrastructure of tribal districts has completely destroyed, the government should have made ten-fold increase in its uplift budget so that their deprivation can be addressed.

The JUI-F leader added that tribal districts students should be given relief in admissions in engineering and medical colleges of the province.

The newly elected member provincial assembly Anita Mehsud in her address said that the tribal people were waiting to get their rights and have representation in the assembly for a long time. She added that women in tribal districts are deprived of all basic facilities and rights and all efforts should be made to address their issues.

The newly-elected MPA on women reserved seat Naeem Kishwar criticized the PTI government saying that JUI-F has snatched its right to reach to KP assembly. She added that the credit of merging tribal belt with the province is not only goes to Imran Khan but also to former PM Nawaz Sharif.

Kishar stressed the federal government to fulfil the promise of the 3 per cent NFC award to tribal districts. She also asked to maintain 12 seats for tribal districts in the national assembly.

PESHAWAR: The Khyber-Pakhtunkhwa (KP) government has converted historical Shahi Mehman Khana building into MPA house for the newly elected MPAs from tribal districts of the province.

The building was constructed by the British government in 1942 and was still used as an official guest house of the KP government. Since there is no enough space available to accommodate the newly-elected MPAs in the existing hostel, therefore, the building of Shahi Mehman Khana has been vacated for the MPAs.

Situated outside the government house, the building has the capacity to accommodate 17 MPAs. For the remaining MPAs, space would be made in the existing hotel. The building will be under the use of MPAs until the KP government constructs new rooms for the MPAs hostel, the officials of the KP assembly confirmed to the media.

Assembly secretariat Officials said that provincial government had formally handed over the official guest house to the secretariat of Khyber Pakhtunkhwa Assembly for accommodating the lawmakers.