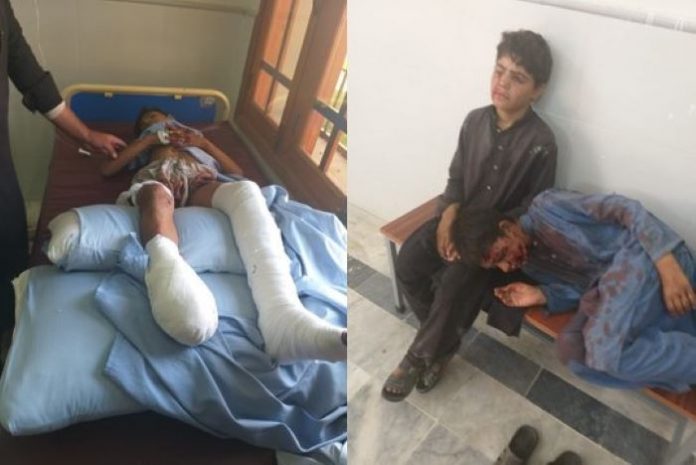 GHALLANAI— At least three children were critically injured in a landmine blast in Safi area of Mohmand tribal district on Saturday.

The explosion happened in a mountain between Mamagat and Sagi Payan area where children were playing, said officials of district administrations. As result, three children, two of them are said to be brothers, were injured. The injured children who were identified as 10-year-old Bilal Khan, 12-year-old Iftikhar and his younger brother 10-year-old Mukamal Shah were rushed to Mamadgat Hospital and then Ghalani Heaquarter Hospital.

After providing emergency treatment, they were referred to Peshawar for treatment. According to Lady Reading Hospital’s sources, the wounded children are hospitalized. One of them identified as Iftikhar has lost his leg in the tragic incident.

It was the fourth landmine incident in last 18 days in tribal districts areas.

In similar incidents on August 20, four persons had lost their lives and eight others sustained injuries in two separate landmine blasts in North and South Waziristan tribal districts.

The first blast was occurred in South Waziristan’s Birmal area, near to Pak-Afghan border, in which four persons, including two children, were killed and six others were injured. The victims were belonged to Gangikhel sub-tribe of Wazir tribe. They were going to an orchard of chilgoza (pine nuts) when their vehicle hit a landmine.

The second landmine explosion was reported in Dangin area of North Waziristan in which two personnel of security forces were injured.

In a similar incident on August 07, a 14-year-old boy was critically injured in a landmine blast in Dattakhel tehsil of North Waziristan.

The boy identified as Abdullah was grazing his cattle outside his home when he stepped over a landmine planted by unknown miscreants. Abdullah has lost his one leg in the blast.

Hundreds of people lost their lives and thousands were injured in the landmine blasts since the militancy insurgency broke out in the tribal districts after US led alliance attack on neighbouring country Afghanistan.