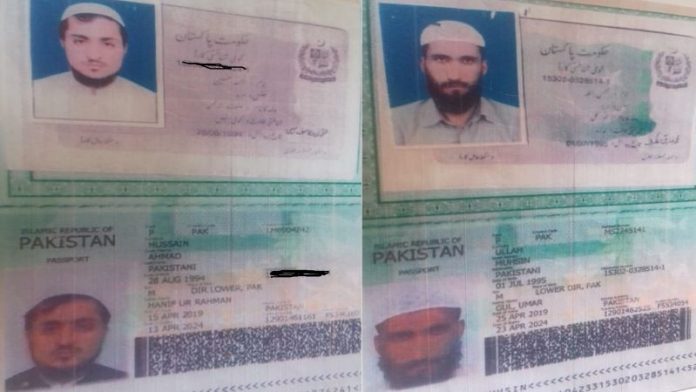 PESHAWAR— Imran was very happy when a man approached him and asked if he wants to perform Umrah, he is ready to pay for his expenses.

It was a dream of the religious scholar Imran to visit Makkha and Madina at least once in his life. It was a perfect opportunity for him to avail as he was very poor and unable bear all expenses of performing Umrah by himself. His close relative, who was also an imam at a local mosque was also offered the same opportunity. Imran was very happy that he would be accompanied by his relative Bashir Ahmad.

Imagining the good willingness and open heartedness of the religious looking man, Imran asked for more favours and asked him for bearing the expenses of his mother and aunt as he wishes to take them for Umra too.

You will pay for them if you want to take them too, he replied. “We send only imams of masajids, madrasa teachers and members of tablighi masjid. I will send you and your relative because you are abstainers,” said the man.

Imran arranged money as he had waited for years for this opportunity.

Accompanied by two other madrasa teachers from another village, Imran along with Bashir Ahmad, mother, and aunt left for Saudi Arabia from Islamabad Airport on May 27 last. Imran left the Hatmul Quran incomplete in masjid to perform Umrah. Shockingly, instead of performing Umrah; they landed in Saudi Arabia jail.

On May 30, Imran’s relatives received a phone call from his mother saying they were arrested by the customs authorities at Jiddah airport upon arriving for carrying prohibited medicines. Later, the women were released while both Imran and Bashir were shifted to the jail.

Ehsanullah, nephew of the arrested men told Daily Times that they had gone there to perform Umrah via travelling agency.

He revealed that Hizbullah, a resident of the Qamr Tall village, had approached Imran and Bashir for Umrah purposes in the holy month of Ramazan. However, at the airport, the accused Hizbuulah’s colleagues met them and gave the tablets that contained heroin; however, they were told that the tablets are for heart disease and there are numbers of people at Umrah who need these medications.

On June 26, both of the women returned home and narrated the whole ordeal to the rest of the family. On the continuous appeals of the victims’ families, the police registered an FIR.

In this regard, a grand jirga was held in the village which was attended by residents of the area from all walks of life and the relatives of the arrested persons.

Former Member Provincial Assembly Malik Bahram Khan also participated in the jirga, who said that Mohsinullah, a religious seminary student in the adjoining village Qamar Tall and Mulona Ahmed Hussain of Samarbagh village, who was the imam of the area, was informed by the villagers that they were arrested as their families are very poor and even don’t afford a mobile phone.

He said that there is a gang in the area which is involved in illegal drug trafficking through people of the area by offering incentives of free Umrah.

It was revealed that they were told that no one from the family or the area should be informed as they have limited resources while this facility is only for people aged between fifty and sixty as well as religious scholars and muftis. They submit passports with them. On May 26, they received a call that they will be left for Umrah tomorrow. The agent sent a van for taking them and informed them there are more people in the way so there is no space for any relative to travel with them.

A travel agent from Tamgarra Bazaar told this scribe that sending people of the area for Umrah is going on for a long time. Currently, more than forty passports are with the travel agency on which Umrah visas have been stamped. However, the owners of the agency have refused to pass Hezbollah passports after the incident. He claimed that Saudi government imposed a fine of 50 thousand riyal on the relevant travel agency while license would be canceled in case of non-payment. Many people have come to Saudi Arabia on drug and drug use agents it’s over but no one is ready to talk about it.

Upon returning, women said that as soon as they reached Islamabad airport, Hezbollah colleagues give tablet boxes to Imran and Bashir and said it is capsules of heart disease and that Umrah visitors might need it. When they reached Jeddah Airport, they were told you are a drug smuggler. They told them that these are not drugs but tablets for heart patients, but they did not listen to any.

A senior police official at Hall Police Station told Daily Times that a complaint has been registered on their request and the investigation is on in the matter.