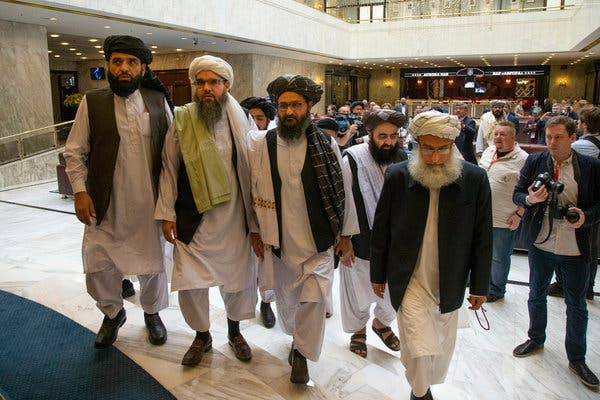 Media reports reveals that opposition Tehrik Taliban Afghanistan ( Emirate Islami Afghanistan) leaders) have been agreed for talks with the Afghan government in proposed meeting to be hosted by the Norway government in its capital Oslo in coming two weeks.

The International media made the reports regards much more awaited first ever direct meeting between the government in Kabul and Taliban at Qatar on the day when a young Pakistani politician made objections on restoration of US-Pakistan relations which termed “pushing the region to a new war” and releasing of huge 125 million US dollars financial support to Pakistan by America.

So far further details regarding meeting between Afghan government and Taliban representatives in Oslo couldn’t made public but it could be considered similar to three earlier intra-Afghan conferences held two at Moscow and one at Doha Qatar. But before of Norway meeting Taliban leaders would visit Pakistan whereas they would talk with Prime Minster Imran Khan and other high ranking civil and military authorities responsible for heals and deals across the border in Afghanistan.

No one can neglect the decades old links between Taliban and Pakistan of Pakistan’s influence on Afghan Takiban (Emirate Islami) politico-strategic matters, which is considered a “universal fact” in end to extremism in the whole region and continuation of hostilities in Afghanistan as well. Most recently Pakistan’s Federal Investigation Agency (FIA) reported unearthing properties of the then Taliban supreme leader Mullah Akhtar Masnsoor in Karachi.

Not only Akhtar Mansour but almost of top Taliban leaders, scattered throughout Pakistan owns properties and engaged in economic activities in Pakistan, which confirm Pakistan’s share in continues violence in Afghanistan. At behest of no other than Pakistan, Taliban are framing its policing and making decisions which including “refusal to talk with legitimately elected leaders and rulers in Kabul.” Ironic, Taliban are reluctant to talk with President Ghani government, legitimately empowered by the well authorised traditional Loya Jirga adopted Constitution and Presidential elections.

Quoting National Security minister Abdul Rahim Rahimi, media reports states, “we are preparing for direct talks, and we are working with all sides and hope that in the next two weeks the first meeting will take place in a European country.” Norway has already offered its services for hosting Doha Qatar like Intra Afghan dialogue jointly hosted by Qatar and Germany. According to Rahimi, the government in Kabul will be represented by a 15-member delegation but he didn’t specified further. However reports reveal that Afghan President Dr. Ashraf Ghani and US Secretary of State’s Mike Pompeo agreed in a telephonic call on previous Wednesday that, “ now is the time to accelerate effort to reach a negotiated end to the war in Afghanistan.”

The Taliban spokesperson Zabih Ullah Mujuahid has however linked any sort of further agreement with talks and deals with the United States. The US Special Envoy Dr. Khalilzad is in Kabul from last several days and consoling the Afghan leaders who are made ager by President Trump through his recent remarks during chat with Prime Minister Imran Khan. On completion of talks, he likely to fly to Doha Qatar for taking the Taliban leaders into confidence regarding Oslo Norway Intra Afghan dialogue and post Trump-Imran Afghanistan future strategies. However, the analysts are considering coming a few weeks very crucial for Afghanistan and its people. For averting any sort of act against its sovereignty and solidarity, the Afghan leadership needs to be very careful and it is the time to stimulate all of its diplomatic and political channels for foiling the intrigues aimed continuation of war flames in that already war affected country.