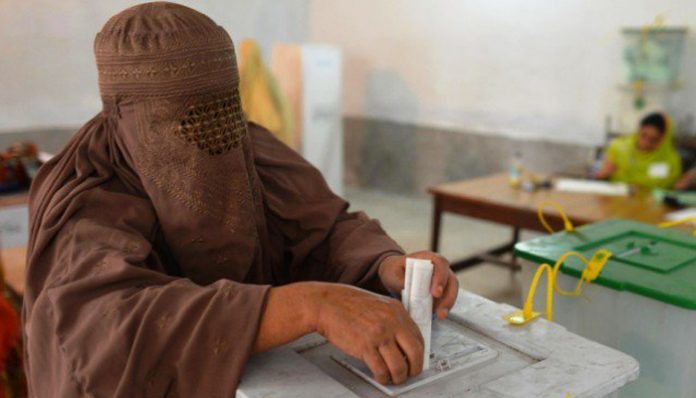 PESHAWAR—- Peaceful and first ever bye-polls for the Khyber Pakhtunkhwa assembly in the recently merged tribal districts was a historic event for the tribal people as they got representation in the provincial assembly for the first time.

People of the erstwhile FATA have been waiting for this historic day for over seven decades to get representation in the provincial assembly.

However, the July 20, 2019 will also be remembered as the historic day for the women who contested and actively participated in the elections process to elect their representatives for the Khyber Pakhtunkhawa assembly.

According to the Election Commission of Pakistan, nearly 26.3 percent of the registered voters in seven districts and Frontier Regions (FRs) of the erstwhile FATA casted their votes for the first-ever elections for the provincial assembly, out of which 18.6 percent were women. The turnout of women voters remained lower by 5.2 percent as compared to the turnout in polls for the National Assembly seats held on July 25 last year. However, the men voters which recorded 31.4% in this election was 8.9% low as compared to 40.3 in July 25, 2018. While the overall turnout dropped to 7.6 percent.

The highest turnout of women 44.5 percent was recorded in PK-109 Upper Kurram constituency where around 33,536 women out of 82,560 cast their ballots. Whereas, the lowest turnout was reported in North Waziristan PK-111 where only 12.3 percent women cast their votes in the election.

The scale of women’s participation in the historic elections took more observers by surprise, where women have not traditionally been active in the political process.

Wafa Wazir, women rights activist from North Waziristan, told Peshawar Today that in previous elections, female voters were not allowed to vote in tribal areas. And that’s why women voters’ turnout in tribal belt always remained low. Though Pakistan has had a female prime minister Benazir Bhutto twice, but the potential power of women at polls begin in 2018 general election in which Election Commission of Pakistan made 10 percent women votes mandatory in constituency both at national and provincial level.

According to ECP laws, election would be declared null and void if the turnout of the women voters is less than 10 percent of the total turnout in constituency.

“Women continued to be under- represented in legislative bodies both at provincial and national level on general seats. But their active participation in politics will increase their turnout and representation finally.

Nausheen Jamal,Orakzai based human rights activist, participated in the election as observer from election monitor Free and Fair Election Network (FAFEN), told Peshawar Today that women were more active than men at the polling day.

Two women candidates, including Naheed Afridi of the ANP and Malasa of the JI, were contested election from PK- 106 Khyber-I and PK-109 Kurram-II respectively managed only 201 votes combined.