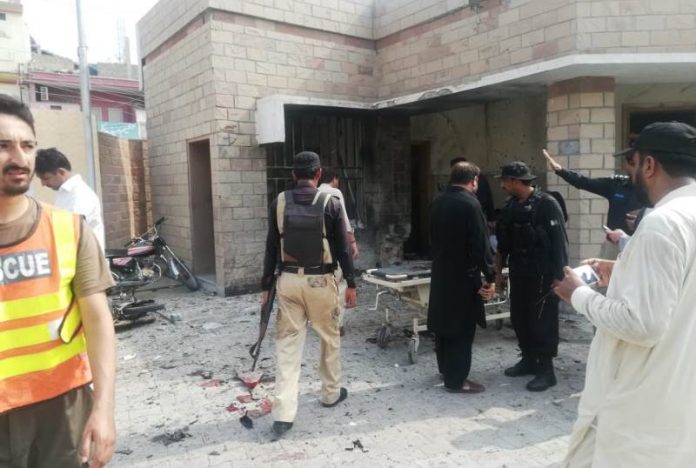 According to District Police Officer (DPO) Salim Riaz, first militants riding on four motorcycles have attacked a check post at Kotla Saidan in a residential area at approximately 7:45 am.

The DPO said that when later following the gun attack, a suicide bomber blown him with explosive packed with body at the hospital where the victims were shifted. When people assembled in hospital, the bomber struck at the entrance to the hospital, martyring four policemen and six civilians who were visiting their relatives, said DPO adding more than 30 others were injured in both incidents.

Inayatullah, a local forensics expert, said a female attacker set off 7 kilograms of explosives packed with nails and ball-bearings.

“The female bomber, aged around 28 years, came on foot and blew herself up, martyring two policemen and four civilians, and wounding 13 others,” he said. The injured included at least eight policemen and five civilians.

The blast damaged the emergency room, forcing it to be shut down, according to a hospital official, who said the wounded were then shifted to a military hospital. The official spoke on condition of anonymity for fear of reprisal.

Tehreek-e-Taliban Pakistan militants claimed responsibility for the attack, which they claimed was a revenge of an accomplice keeled during an encounter with police on June 23 last. But TTP spokesperson Muhammad Khorasani did not acknowledge that the bomber was a woman.

Khyber Pakhtunkhwa Chief Minister Mehmood Khan strongly condemned the incident and said that they shared the grief of the victims’ families.