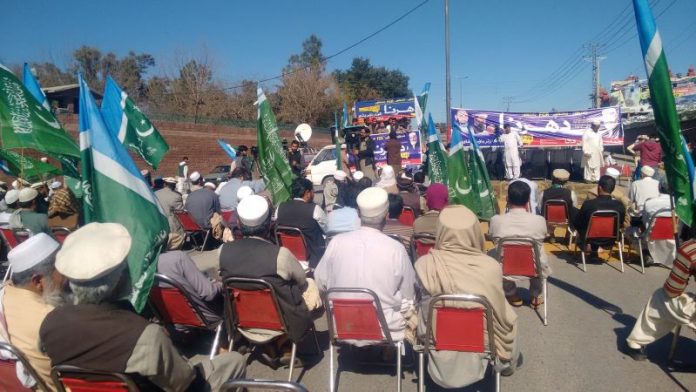 PESHAWAR— After the humiliating defeat in 2018 general elections, Jamaat-e-Islami had decided to quit Muttahida Majlis-e-Amal (MMA) again and contest tribal district polls, slated for July 20 next, on its own strength.

Just before the 2018 general elections, the JI joined the revised MMA, an alliance of five right wing religious political parties, with the hope of better outcome like 2002 polls result in Khyber Pakhtunkhwa. The results, however, were very disappointing for the JI and it triggered the leadership to part ways with MMA.

In that elections, the JI had contested on 37 seats of the provincial assembly as per sharing formula but lost all seats except to retain seat of the former senior minister for local governments Inayat Ullah Khan from Upper Dir PK-12.

Interesting to mention that JI even lost in Lower Dir, which was an impenetrable fortress of the JI and the native district of party head Sirajul Haq, where they would never have thought to lose there.

Soon after the elections, its leadership announced parting ways from JUI(F) major component of the alliance which had swept 2002 general elections in almost KP and decided to contest tribal district elections on its own party symbol. The JI has fielded its candidates on more than 13 out of the 16 seats hoping for a better result than the previous elections, where they never won even a single seat after extension of Political Parties Act 2002 in 2011 then the government.

As per sharing formula, JI contested on 37 seats of the KP assembly and won only a single seat in 2018 general polls

However, the background interviews from these constituencies suggest that the JI candidates and its leadership had failed to woo voters and its looks very difficult for it to bounce back in the elections from previous debacle. JI are only considered strong on two seats out 13 it contesting. These seats are including PK-102 from Bjaur and PK-106 from Khyber.

In PK-102, Siraj-u-Din Khan of Jammat-e-Islami has a great opportunity to win the elections as PTI vote bank is divided there over presence of two candidates, says Shah Khalid Shahji, a local journalist covering elections campaign. A close contest is expected between the PTI and JI candidates in PK-102. However, the presence of the Rahim Dad will contribute in maximizing chances of winning for JI candidate, added he.

Shah Jahan is the only second candidate who have best chance to wrest the district Khyber PK-106 seat that consists on areas Jamrud Tehsil and some parts of Bara tehsil and make room for the party presence.

The political experts and observers say that the JI confused policy and lack of political wisdom are the main reason of its poor performance in the elections. The experts say it would be a great pleasure if JI even opened its account in tribal district elections.

Shamim Shahid, a senior journalist and political expert, said that the JI leadership is very much confused in fixing its political strategies and policies. Unlike the past when JI was always backed military establishment, JI went into background after emergence of the ruling Pakistan Tehreek-e-Insaf which is much close to establishment.  Therefore, the JI leadership are now confused whether to support opposition or government and that’s way its continuously changing their partners.

Aqeel Yousafzai, a political analyst, said that the solo flight of the opposition parties created a great opportunity for the ruling PTI to get maximum seats in the tribal district elections and effectively counter the pressure created by the opposition forces in the backdrop of inflation, unemployment and financial crisis in the country. The opposition forces have still an opportunity to contest the elections combine and give tough time to ruling party, said Aqeel Yousafzai.

The JJ had won seven provincial assembly seats in 2013 general elections and was part the PTI coalition in the previous assembly. However, they secured only a single seat in the 2018 elections contested on MMA platform. Its seemed hard for JI to open its account in tribal districts elections.