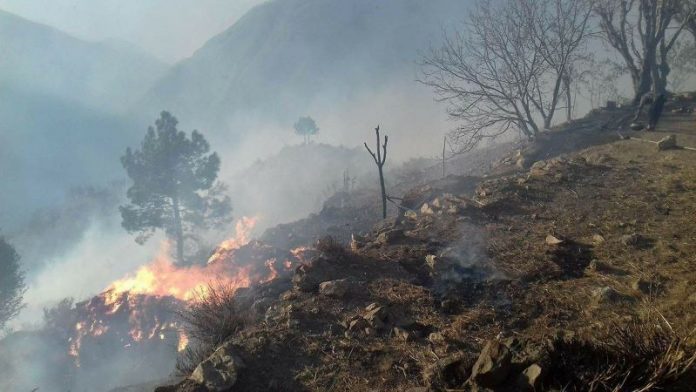 PESHAWAR— Ejaz was waiting that firefighters will come to extinguish the fire erupted in the Ganidyan forest area of Harripur.

After a whole day wait for the fire firefighters to respond to the fire which was about to engulf the residential areas, Ejaz, a college student along with other villagers started firefighting operation which was started from Jabari Tiyalan village a day earlier (Friday).

The fire continues to turn the trees into ashes and destroy hundreds of acres of land; the villagers intensified their frantic efforts to put out the fire. Ejaz and Abdul Rasheed, 55, sustained burn injuries during their efforts to extinguish the fire. They succumbed to their injuries before getting any medical aid while two others also collapsed due to heavy smoke.

Later, the rain that lashed different parts of Hazara on the night between Saturday and Sunday proved a divine help in saving hundreds of acres of land from destruction in Gandiyan forest range of Haripur where fire raged for the last two days.

The locals say the fire erupted in the forest area of Jabri Tiyalan village on Friday, but due to lack of forest fire fighter management and poor response from the forest department, the fire spread with blowing wind to the hilly area of Ganidyan village where the incident took place.

It was not the first incident of firing in forest areas. The incident followed by two more similar incidents in Swat, the hometown of chief minister Mehmood Khan in which hundreds of precious trees were destroyed. The fire was erupted in Ala Abad area of Charbagh tehsil and Faizabad area of Saidu Sharif.

The latest incident took the total numbers of wildfires to 126 in 2019, making it the worst year on record already.

According to Forest Department, more than 1.2 million saplings and trees were burnt in these forest fire incidents resulting in a total loss of 20.6 million rupees. In the last two months alone, more than 90 fire incident were reported in the province. Most of the incidents were reported in district Swabi, Mardan, Swat, Nowshera, Kohat, Hangu and Dera Ismail Khan. However, Swabi remained the most affected district where several hectares of forest cover turn into ashes.

Replying to a question, Muhammad Tehmasip, Project Director of ‘Billion Tree Afforestation Project’ said out of the 126 forest fire incidents, a very few were occurred where they had planted trees under billion Trees Tsunami Project (BTTP). A very marginal number of BTTP trees were affected by the forest fires which makes just 0.012 per cent of the project.

Counting reasons of the fire, he said that fire eruption in forests is the result of tourist activities who leave fire after picnic and disputes among communities. The fire was mostly on top of the mountains where strong winds acted as a fuel to it.

The major reasons of the highly damages to trees and forest land is the lack of firefighting management.

That’s why when fire erupted in Karamar forest in Swabi last month, KP forest department sought out help from rescue 1122 and the military to extinguish fire which was lasted for five days.

Commenting on the Chief Minister’s decision of establishing divisional forest fire management team, a high rank official source in forest department said a well-equipped firefighter force is required instead of forming a committee of high officials. They cannot go by themselves to extinguish fire. They need to hire and train man power for forest areas. However, he said that even the daily wagers of the BTTP have not been paid their salaries for the last six months.

The government should have established a well-equipped forest firefighting force to not only save forest areas which are on one side sources of the beauty of these mountainous areas while on the other side, a source of income too.