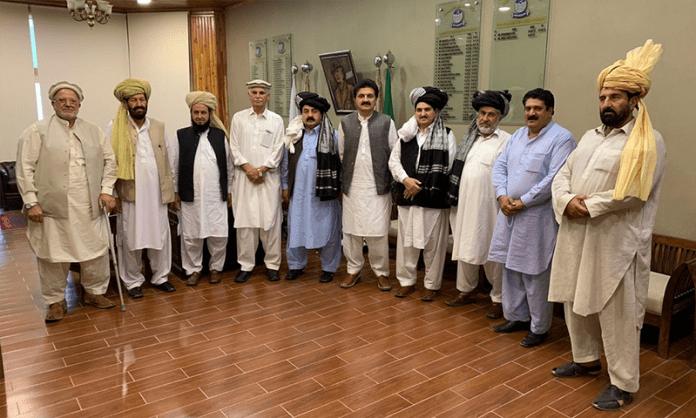 MIRAN SHAH: Adviser to the Khyber Pakhtunkhwa chief minister on merged districts, Ajmal Wazir, on Sunday announced he has formed a nine-member jirga to hold discussions on the Khar Qamar clash.
The advisor, during a visit to Miram Shah, met the tribal elders of North Waziristan and agreed to constitute a jirga to determine the way forward following the clash which took place a week ago between Army soldiers and a group of protestors in which three people were killed and 15 were injured.
Wazir said that a meeting of the jirga is scheduled for Monday in Peshawar. “Peace will be maintained in North Waziristan at each cost,” he assured the jirga.
He added that he is aware of tribal customs and norms to settle disputes in the interest of erstwhile Fata, and that the tribal districts will be kept onboard for peace as well as development in the region.
The jirga comprises chief of Waziristan, Malak Nasraullah Khan; chief of Dawar tribe, Malak Khan Zeb Khan; Malak Shah Nawaz Khan Madakhel; Malak Khan Marjan Dardoni; Malak Habibullah Darpakhel; Malak Jan Faraz Khan Dardoni; Malak Mir Qadar Khan Darpakhel; Malak Ghulam Khan Madarkhel and Malak Peer Aqal Zaman Tapi Dawar.
The jirga also distributed compensation cheques to a few affected families, announced a day earlier by the provincial chief minister, Mahmood Khan.
According to the chief minister, Rs2.5 million will be given to the families of the deceased and Rs1 million to those injured in the incident.
On May 26, the Inter-Services Public Relations (ISPR) released a statement saying that a check post had come under attack by a group with whom an exchange of fire ensued, resulting in the death of three people, and injury to 15, five of whom were soldiers.
“A group led by Mohsin Javed [Dawar] and Ali Wazir assaulted Kharqamar check post, Boyya, North Waziristan tribal district this morning. They wanted to exert pressure for release of suspected terrorists’ facilitator arrested the other day,” the military’s media wing said in the statement, without specifying who the suspect was.
Dawar, however, had denied that the group opened fire and accused the Army of initiating violence. Both Wazir and Dawar, who are MNAs and leaders of the Pashtun Tahaffuz Movement (PTM), are currently under arrest.
In a later statement on Twitter, the director general of the ISPR, Maj Gen Asif Ghafoor, had said that “innocent PTM supporters/workers need care”.
“Only few are inciting and using them against state institutions for vested agenda. No one will be allowed to undo the gains of decades long national struggle & sacrifices especially of brave Pakistani tribals,” he had added.