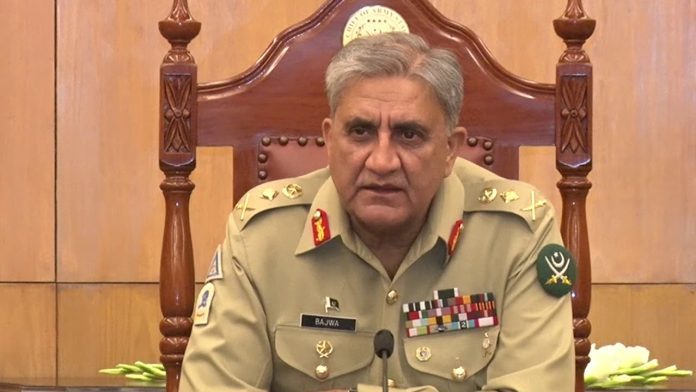 ISLAMABAD: In an unprecedented development, a three-star retired general has been sentenced to 14 years in jail and a retired brigadier awarded the death sentence by field general courts martial on charges of espionage and leaking “sensitive information” to foreign agencies.
A doctor associated with a “sensitive organisation” has also been handed down the capital punishment on similar charges.
According to a brief statement issued by the Inter-Services Public Relations (ISPR) on Thursday, Chief of Army Staff General Qamar Javed Bajwa endorsed the punishment to the officers on the charges of “espionage and leaking of sensitive information to foreign agencies prejudice to national security”.
The officers — identified by the military’s media wing as Lieutenant General (retd) Javed Iqbal, Brigadier (retd) Raja Rizwan and Doctor Wasim Akram — were tried under the Pakistan Army Act and Official Secrets Act by separate field general courts martial in separate cases.
Lt Gen (retd) Iqbal has been awarded 14 years rigorous imprisonment, while Brigadier (retd) Rizwan has been handed down the death sentence. Doctor Akram, who, according to the ISPR, was employed at a sensitive organisation, has also been awarded the death penalty.
Individuals, both in uniform and civilian government positions, are under obligation not to pass on secret information under the Official Secrets Act. Violation of the act is punishable by death or life imprisonment.
The ISPR did not disclose the exact nature of espionage the officers were involved in but certain reports suggest that they had passed on sensitive information to the American Central Intelligence Agency (CIA).
The reports about certain military officials facing trial under the Official Secrets Act first surfaced in February.
The chief military spokesperson subsequently confirmed those reports.
“…Two officers are under military custody on the charges of espionage,” ISPR DG Major General Asif Ghafoor had said at a news briefing a few months back. “The army chief has ordered a field general court martial which is under process,” he added.
However, the military spokesperson made it clear that those were individual cases and there was no network involved in espionage.
“The fact that authorities were able to nab these individuals is our success.”
Lt Gen (retd) Javed Iqbal
Lt Gen (retd) Javed Iqbal has held key posts in his military career. As a brigadier, he headed the important 111 Brigade in Rawalpindi. He had remained the director of the General Military Operations (DGMO) during which he is believed to have gained access to sensitive information and passed it on to foreign agencies.
He was later promoted to the rank of lieutenant general by the then army chief, General Ashfaq Parvez Kayani.
As an adjutant general, he also headed the investigation into the Abbottabad fiasco. He was serving as the Bahawalpur corps commander before his retirement in 2016.
There is not much information available about Brig Raja Rizwan. Some reports suggest that he served as defence attaché in the Pakistani mission to Germany.
The convicts have the option to file an appeal against the sentences. Their appeals, if filed, will be heard by a court of appeal headed by a lieutenant general.
“If their sentences are upheld, they have the right to file an appeal before a high court and subsequently before the Supreme Court,” the retired colonel said.