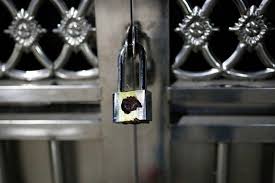 According to a press release issued here stated that on the directive of Chief Secretary KP and Managing Director KPPSRA a team of PSRA comprising Deputy Director Sohail Aziz and Assistant Director Zainullah Garwaki in collaboration with District Administration sealed the schools for propagating negative propaganda regarding polio vaccination.

It is worth mentioning here that rumors of children fainting or vomiting after they received a vaccination against the polio virus in Badhber village Peshawar.

As the rumors spread, thousands of panicked parents rushed their children by car, motorcycle, and foot to major hospitals in the city, forcing the stunned health facilities to declare emergencies. Panic then turned into anger, with one mob burning down a local medical clinic in a Peshawar suburb. After a while an anti-vaccination propaganda videos rapidly went viral on social media, with one claiming children had been “poisoned” by the drops.