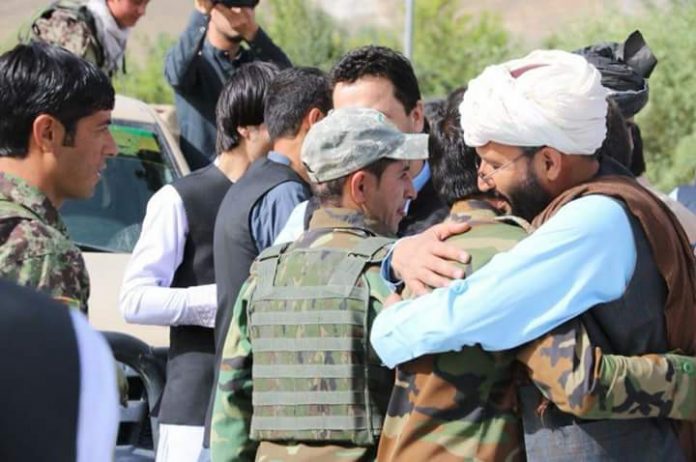 On the eve of Universal Mother Day observed like other parts of the world also in neighbouring Afghanistan and Pakistan on May 12, 2019. On that particular day, no any official gathering arranged either in Afghanistan or in Pakistan but the people who are aware about importance’s of mothers, shared their views and good wishes for mothers through social media’s.

A Peshawar based free lance journalist Islam Gul Afridi has shared his one year old net report pertained to ceasefire declared in war stricken Afghanistan on the eve of Eid Ul Fitre. The report was focused on love of mother for her two sons who were made disintegrated by imposed wars, ideologies and beliefs. The news item received thousands of likes within minutes and almost people from all over the world in general, Afghanistan and Afghans dominated areas of Pakistan in particular prayed for return of peace and an end to every sort of hostilities and terror in the region.

Muhammad Agha and Said Agha, two brothers from a Kandahar village have been welcomed by their mother on Moon-night of Eid Ul Fitre when the Afghan government and Taliban have declared ceasefire. Muhammad Agha entered home first and he was received with warm welcome by mother and Said Agha followed later. Both of them met with mother but they didn’t shake hands with each others as they belong to different professions and dissenting religious beliefs and political stances.

Muhammad Agha was serving in Afghanistan National Army whereas Said Agha was holding the office of a commander in Taliban Resistance groups. One was sitting in courtyard whereas the second was occupant of a room inside boundary wall of the house. And the mother was remain a shuttle-cock between the two as she had witnessed sons inside the home after a long time. Ironic she time and again prayed for the safety and security of both the sons who are associated with the rival groups, engaged in fighting and hostilities.

Agha brothers are not alone made disintegrated by imposed wars, ideologies and beliefs in Afghanistan. Similar instances are very common in all over Afghanistan. And it is not first or last in history of nations. Similar was the situation during the so-called cold war in Germany and several other European countries. But with end of so-called cold war, the Europeans have realized past blunders and instead they embarked on a unique journey of reconciliation whereas they not only declared an end to over one-century old hostilities but they declared an end to every sort of geographical borders. Now around 25 different states and countries are one European Nation.

Irrespective of their religious faiths and beliefs, political ideologies and lingual divisions all of them are considered one European whereas they sharing every sort of socio-economic issue. All of them are having unanimity on peace, progress and prosperity. And Agha brothers mother had made similar prays for a durable peace, stability and prosperity in Afghanistan when she was seeing off her sons on end of ceasefire and Eid Ul fitre holidays. Almighty Allah help the war stricken and disintegrated countrymen to be united like the Europeans.