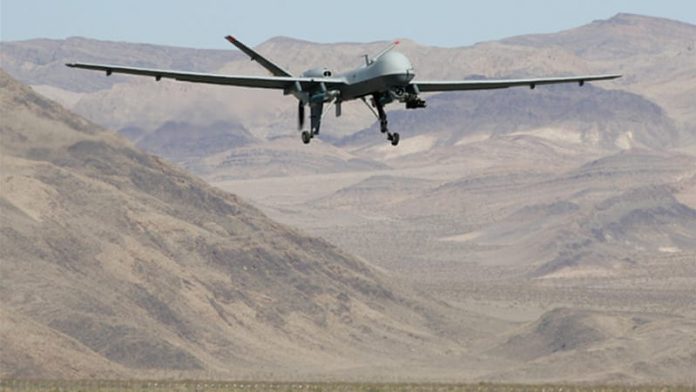 PESHAWAR- At least five militants belong to North Waziristan and associated with Shura-i-Mujahideen of Hafiz Gul Bahadar have been killed in an alleged US drone attack just on Pak Afghan border late on Friday night.

Though so far no any official statement issued regarding the latest US drone attack in border areas after a period of around 15 months, but the civilian officials said that a compound of militants established inside a house was targeted by US drone with two missiles. Political analyst Prof. Dr Khadim Hussain believe that unless an end to Good and Bad Taliban phenomenon no one could ensure an end to terror in the region, adding that US and international forces are aware about the militants involved in across the border terror in Afghanistan. But Brig. (Retd) Mahmood Shah has termed it retaliatory action by armed forces in the wake of couple of days attack, which causes lives to four personnel.

Since 2004 over 480 US drone attacks registered in different parts of former tribal regions now merged as districts in Khyber Pakhtunkhwa, killing over 2500 people. Out of which more than 111 were described as senior members of militants group that include top Al Qaeda, banned TTP and other local and foreign militant groups. They were included Ibne Amin, known as the “butcher of Swat“, al-Qaeda chemical weapons expert Abu Khabab al Masri, and banned Tehreek-e-Taliban Pakistan (TTP) chiefs Hakimullah and Baitullah Mehsud, and Wali Ur Rehman.

Pakistan time and again shown resentment over these US drone attacks and terming it violation of its sovereignty and solidarity. But the US authorities are considering drone technology very affective and well targeted in the ongoing war on terror.