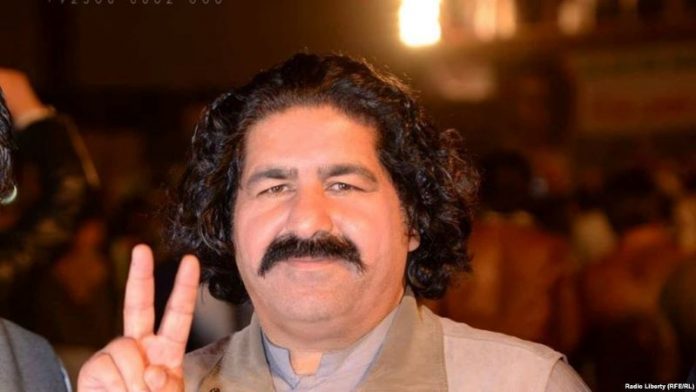 PESHAWAR—North Waziristan Police has registered first information report (FIR) against Pakhtoon Tahafuz Movement (PTM) leader and MNA Ali Wazir and elven others on the charges of chanting anti-state slogans and provoking people for a revolt against armed forces.

The FIR registered on the report of District Police Officer Mr. Kifayat Ullah in Mirali Police Station in connection with a protest held against target killing of personnel of Khasadar forces at Shewa on May 1st. The protest was attended by thousands of people and beside others addressed by Ali Wazir.

Ali Wazir, who is also MNA from South Waziristan, along with 11 others have been charged for chanting anti-armed forces and other slogans including declaring people living on both sides of Pak Afghan border as “one Afghan.Ali Wazir and 11 other individuals booked for enticing people to revolt against the state and for protesting and chanting slogans against state and security forces” FIR read.

Reacting to this, PTM central committee leader MNA Mohsin Dawar said that it confirmed dual standard of government and state as well. Ironic no any case registered against those who are engineering violent and terror act but those who are opposing killing and violent acts are facing charges.

Khyber Pakhtunkhwa Information Minister Shaukat Ali Yousafzai said that FIR or cases could be registered against all those who are violating rules of law or creating law and order situation.

Inter-Services Public Relations (ISPR) Director General Maj Gen Asif Ghafoor last week in a press briefing had accused PTM of getting funds from Afghanistan’s secret agency, National Directorate of Security (NDS) and India’s Research and Analysis Wing (RAW), saying “those who are playing in others’ hands, their time is up”.

Similar cases also registered against scores of PTM leaders and stalwarts throughout the country during last one year and almost of booked persons have got release through courts in these cases.