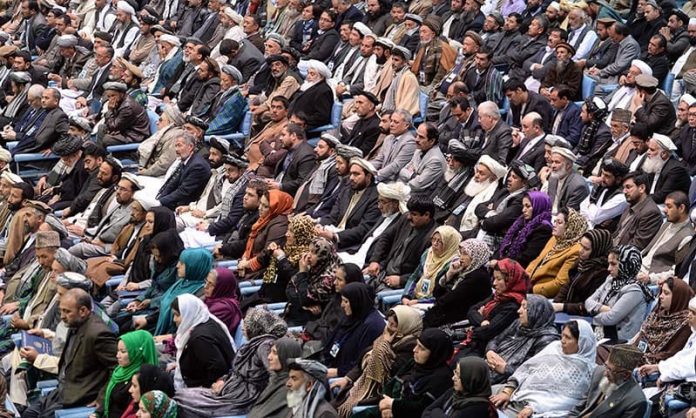 The consultative Loya Jirga assembly commenced in German government gifted tent ( in June 2002)on Monday morning with the inaugural speech of President Dr. Ashraf Ghani whereas he highlighted its objectives to help in the peace efforts and reconciliation truce with Taliban.

In his inaugural speech before the Consultative Loya Jirga, Dr. Ashraf Ghani has highlighted achievements of his government which included maximum focus on curtailing of CORRUPTION, Misuse of powers and war lordism. He claimed of getting maximum success in the task which he added is being appreciated by youths. He nominated Prof. Abdul Rab Rasool Sayaf as President of the Jirga.

The Jirga is being attended by 3200 delegates included parliamentarians both members of Ollassi Jirga (National Assembly or Lower House) and Masharano Jirga ( Senate or Upper House), Provincial Councils and District representatives ( One each from every district). At least 300 diplomats and high ranking government officials were invited to the first ever session.

T he Jirga will continue till Thursday. Now the Jirga is going to enter into groups discussions. Each group would comprise 70 delegates. The group would discuss different issues and later on present its reports, recommendations etc, which will be accommodated in declaration to be adopted in the concluding session.