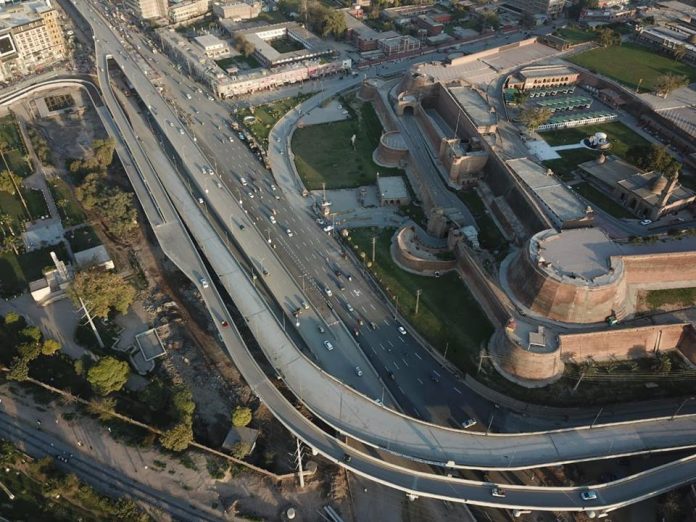 PESHAWAR: Suffering from chest pain, twenty-two-year old Zeeshan approaches Lady Reading Hospital, the largest tertiary healthcare facility of Khyber Pakhtunkhwa province, bordering Afghanistan. After being diagnosed with lung-related disease by a pulmonologist, he is advised to have a few blood and X-ray tests.

The revelation regarding the lung disease is, indeed, disturbing for the young Zeeshan, running a cloth shop in Peshawar’s Saddar bazaar, who never remained an habitual smoker even. He, however, travels daily alongside the under-construction Bus Rapid Transit corridor, stretched over around 30 kilometers area of the provincial capital to reach his shop.

The environment experts believe that construction of the bus project, removal of the green belt, and ever increasing vehicles especially auto-rickshaws emit poisonous gases like nitrogen oxide, carbon dioxide, sulpher dioxide, smoke and hydrocarbons into the air, turning Peshawar into one of the most-polluted cities of the world.

According to Regional Transport Authority, there are more than 60,000 registered and unregistered rickshaws in the city with half of them unfit to maintain healthy environment.

Afsar Khan is an officer at the Environmental Protection Agency (EPA). He says that government should ban two-stroke engine rickshaws which significantly contribute to air pollution.
Zubair, who manages the provincial transport department’s Vehicular Emission Testing Station (VETS), is of the view that Peshawar’s noise level is always above World Health Organisation’s limit of 85 decibels.

The BRT project has resulted in a spike in the number of people affected by chest diseases as reported by various hospitals in the city. Due to excessive digging and drilling for the project across the city, dirt remains piled up at various locations. Areas close to Grand Trunk Road including Haji Camp Adda, Gulbahar, Bilal Town, Sikandarpura, Ashraf Road, Khyber Bazaar and other adjoining localities, remain covered with dust.

In December last, The Peshawar Traffic police officer Kashif Zulfiqar wrote a letter to the Peshawar Development Authority, which was the executing agency of the BRT, director general asking for the medical treatment to more than 400 traffic wardens affected by dust storms caused by the heavy construction activity on the BRT route. The PDA had accepted a request of the city traffic police for pulmonary and hepatitis treatment of its around 400 personnel deployed on the BRT route.

Residents of nearby localities also complain of how increase in dust pollution, due to the construction work, resulted in an increase in health-related issues, especially among children and elderly people.

Dr. Abdul Wahid – a senior pulmonologist at Lady Reading Hospital – tells Peshawar Today that information gathered from different hospitals in the city reveals that during the last two years chest and lungs-related diseases have registered a sharp increase. “The BRT project is one of the major causes of this increase.” Presently, he adds, not only smokers are suffering from lung diseases but also those who are total abstainers. He advises that people must take precautions to protect themselves from diseases which may be caused due to excessive dust.

Fifty-year old Qasim Gul is another victim of the dust pollution. He is recently diagnosed with tuberculoses and is under treatment at the Hayatabad Medical Complex. He quit smoking around 12 years ago. However, for the last few months he is suffering from severe chest pain. Doctors advised Gul to wear mask while going out of home and take care of cleanliness.

Hammad Alam Munir – an MS student at Department of Environment, University of Peshawar – whose research topic is ‘Air pollution and its impact on human lives’ tells the Peshawar Today that there are several causes of increasing air pollution. “Rapid increase in population is one of them.”

He says that the number of private vehicles is rapidly increasing in Peshawar. Moreover, brick kilns in the surroundings of Peshawar are considered main source of pollution, discharging thick black smoke. Around 650 brick kilns operate around the city in which coal and used tyres are burned. Moreover, cutting of trees and unplanned urbanization are the main causes for air pollution, he maintains.

Munir claims that Peshawar Development Authority (PDA) has not taken into consideration an environmental management plan designed for the ongoing BRT project and thus, causing high concentration of particulate matter (pm10) and heavy dust in the air. With the execution of BRT project, not only air quality deteriorated in areas along the route but a layer of thick dust has also engulfed the adjacent localities, he adds.

Peshawar with the population of 4.27 million was ranked sixth in the worst air polluted cities globally and second in the country as a part of a WHO study. According to WHO, air pollution causes more than 7 million premature deaths worldwide.

The provincial government, under its aforestation project planted thousands of saplings on various locations in the city including along the sides of the main GT Road, University Road and Hayatabad. But the construction on the BRT deprived the citizens of the city to get benefited by the future green cover beforehand.

Project Director of the BRT, Muhammad Jan, reveals that around 30,000 newly-planted saplings from Chamkani to Malak Saad Flyover were uprooted and relocated at LRH, Peshawar Zoo, schools, colleges and from Hayatabad Ring Road to Charsadda Road.

He says that the construction work on BRT project is almost complete, adding that PDA has already initiated work on saplings plantation and restoration of greenbelts at various points to bring back the lost glory of the city. He says that tree plantation has been completed at Aman Chowk. Furthermore, he adds, PDA has set a target of planting around 10,000 saplings at various places of the city in the near future.

Dr Wahid says that air pollution not only causes chest diseases, but also skin diseases and eye allergy. Initially patients feel minor chest pain however with the passage of time it causes tuberculoses and other diseases, he says.

The BRT project was initially planned to be completed in six months however after one and half year the project is still under construction. The recent deadline for the inauguration of the project was March 23, 2019. But it also proved to be a hollow slogan.

Khyber Pakhtunkhwa Chief Minister Mahmood Khan tries to defend the delay in the project, saying that there is significant progress on BRT project, however some work is pending. “Therefore, I have decided not to open an incomplete project.”

Likewise, Khyber Pakhtunkwha Minister for Information Shaukat Yousafzai holds the unusual long spell of rains this year responsible for the delay in the project.