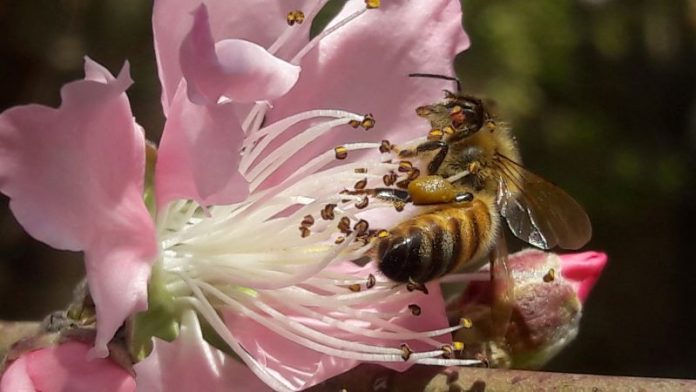 PESHAWAR: Associated with the honey production business, Shams Ullah work as both a laborer and a honey entrepreneur and his family’s livelihood is dependent on flower blossoms from which the bees collect the nectar to make their honey. Unfortunately, due to climate changes his annual income is drastically decreasing over the last few years as honey production has dropped precipitously.

In winter season, Shams use to carry bee boxes to Kohat, Karak, Dera Ismail Khan, while in summer, these bee boxes were shifted to cold areas like Naran, Kaghan, Swat, Wana, Razmak and to parts of neighboring Afghanistan.

Due to increasing temperature mainly attributed to climate changes, production of plants and flowers had reduced making it difficult for the honey bees to survive.
One reason for the decline of natural honey production is the rapid deforestation. While deforestation might have reduced honey production, the unseasonal rains of the last few years have completely destroyed it. The rains have killed the flower blossoms from which the bees collect the nectar to make their honey.

Naeem Qasmi – Pakistan Bee Keeper Association’s president and Chairman of Sarhad Chamber of Commerce Standing Committee on honey – said that more than 0.8 million people are associated with honey business.
Honey bees pollinate million of worth crops each year and according to experts, it is the only effective way to pollinate crops.
Naeem Qasmi says Pakistan exports more than 700 containers honey bee annually which contribute Rs 5billion of Pakistani agriculture export index. Each container carries 20,000kg honey.

Currently, only four-kilogram honey is produced from a single bee box while earlier this production was stood at up to six kilograms.
Scientists are not clear exactly to ascertain the factors responsible for the decline in honey production; however, they believe that climate change is contributing in its reduction.

In the context of climate change, Dr Hussain Ali, who conducted his PhD research on “Effects on honey Bee mental and physical health due to environmental changes”’ says that climate change in the region has affected honeybees directly and indirectly and resultantly its production is on decline in Khyber Pakhtunkhwa.

He said that climate change is causing habitat and behavior loss as bees fail to migrate to cooler areas and establish new hives. Similarly, another issue is the rise in temperature. He said that bees require 35 degree centigrade temperature to survive in boxes. They are unable to produce honey in the high temperature rather than struggling to survive.

He says that study shows that average temperature has also witnessed change during the last four years, creating a potential mismatch in seasonal timing between when flowers produce pollen and when bees are ready to feed on that pollen.
In Southren areas of Khyber Pakhtunkhwa ziziphus jujube tree produce flowers in mid-October but now it produces flowers in August. While in August, temperature is very high and it is very difficult for bees to produce honey.

Similarly, the unpredictable and untimely rains had also changed and a small mismatch of three to six days could negatively affect bees’ health, making them less likely to reproduce and less resistant to predators and parasites.

An Afghani Refugee in Pakistan – Baz Muhammad – associated with honey production for last twenty years, told that they shifted bee boxes to Khyber Pakhtunkhwa District Karak, Kohat, Bannu, DI Khan and Nowshehra for Acacia, Orange, Baair, Lachi, Palusa and other plants flower but due to forest belt harvesting and lack of honey production flowers badly effect the reproduction of bees.

Naeem Qasmi believes that plantation of honey friendly trees could overcome the challenge therefore he requested the provincial government several times to harvest such forestation in the Billion Trees Plantation. However, every time he receives discouraging response.

The wild honey bees are living in mostly forest and cold areas of Khyber Pakhtunkhwa including Kaghan, Naran, Swat, Tira, Parachinar, Karak, and DI Khan which makes their homes in trees, where deforestation is on its peak. Small size honey bees were more affected as compare to large size due to environmental changes because the large size bees fight to survive for more time as compare to others.

The massive reforestation project has added more than 350,000 hectares of trees both by planting and natural regeneration said he adding more than 42 different species has been planned based on their ecological zone including chir’ deodar ‘kail’ Robinia ‘Kikar ‘ Shisham ‘Ber ‘Bukian ‘Ailanthus ‘Poplar ‘ Tamarix ‘kitchnar ‘Dahaman ‘Quercus’ Mulbery ‘Walnut ‘Amlok ‘Chilgoza ‘Eucalyptus ‘ Iple Iple ‘Horsechenrst ‘Phuli ‘.
He claimed that, in a very short time of the project forest honey bees increase and will increase more in upcoming time.

Dr Hussain said that, due to de forestation and high temperature the insects which live on flowers juice fight for survive and the frail species will finished from the area. Appraising and appreciating the Billion Tsunami project, he such projects are much needed for addressing climate change adverse affects and government should plant honey friendly trees in the federal government project.