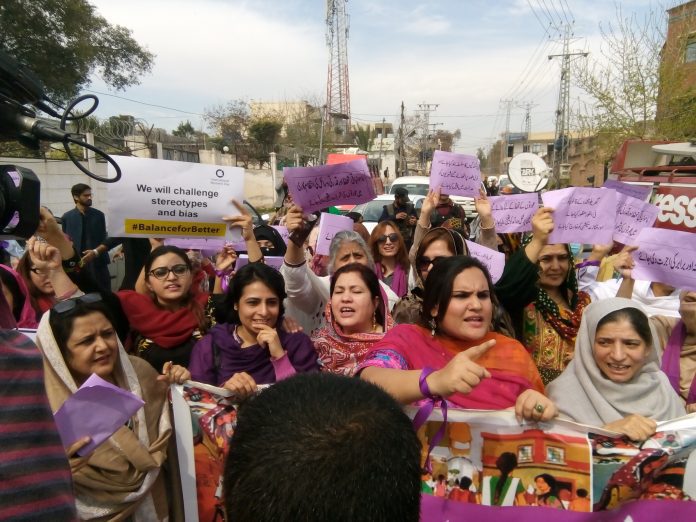 PESHAWAR— The women from cross-section of society of Khyber Pakhtunkhwa on Saturday held a March here in Peshawar demanding implementation of women protection laws, gender equality and protection.

The speakers at the march which ended the Peshawar Press Club, also condemned killing of the Afzal Kohistani who exposed honour killing and was the main eye witness of the five women who were killed in Kohistan by their relatives over clapping and singing in a video of men dancing.

The women in the march were holding placards deciphering demands with regards to immediately enactment of domestic violence prevention and protection bill.

They presented a charter of demands that includes the prevention of domestic violence against women and their inclusion in provincial cabinets and decision making process.

The women demanded of the government the formation of harrasement committees under harrasement Act 2010 ensuring display of code of conduct and addressing enforced disappearances and the disappeared persons may be produced in Court of law.

Gulalai Ismail, a human rights activist while talking to the scribe said the government should conduct local bodies elections with representation of women on general and reserved seats and make a policy and legislation for home based workers. She further added, provincial and local bodies elections in newly merged districts of the province may be conducted ensuring 5 percent women candidates.

The March also condemns the murder of Afzal Kohistani and call for protection of witnesses so that witnesses in violence against women cases continue to raise their voice fearlessly.