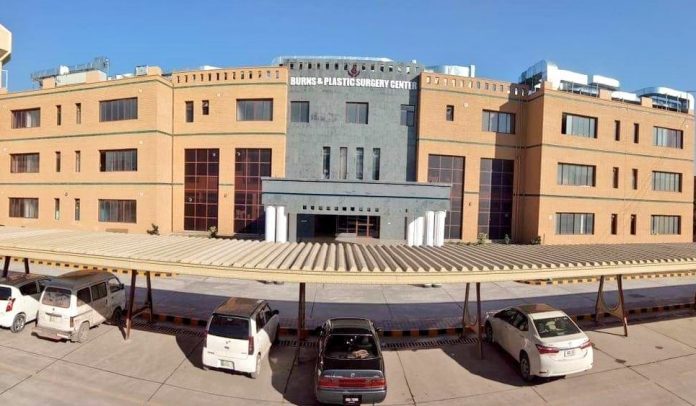 PESHAWAR— The Khyber Pakhtunkhwa first ever state-of-the-art burn and trauma center has finally started functioning on Tuesday in Peshawar with 120-beds, 300 trained staff and equipped with the latest treatment facilities.

The KP Chief Minister Mehmood Khan has inaugurated the burn and trauma center in a ceremony which was attended by the officials of United States Agency for International Development (USAID), medical and government representatives.

While burn victims previously had to travel Islamabad and Kharian, Punjab province, for treatment that added to their mental and physical distress.

As, its construction was started in 2011, It took several more than eight years to get completed due to the lack of funds that the federal government and the Workers Welfare Board (WWB) was supposed to provide.

Payment was made for some time but construction work had to be stopped in 2013 when the government and WWB stopped further funding to the project.

Later the PTI previous government released funds for construction work so to complete the inevitable project to provide high quality medical services of hundreds of people have died as no facilities were available in Peshawar to treat burn victims.

The 120-bed facility has 50 reserved beds for burn patients, 14-bed intensive care unit and the remainder for patients who need plastic and reconstructive surgeries, said Dr. Tahir Khan, Head of Plastic Surgery Department and Director In-charge of Burns and Trauma Centre. The center can have six major and two minor operation theatres and can accommodate 10,000 patients annually.

The facility will serve all parts of KP, including the newly merged areas (formerly known as the Federally Administered Tribal Areas or FATA) and other areas bordering Afghanistan.

According to USAID press release, the project was launched with the help and input of government officials and the US Agency for International Development (USAID), which provided Rs. 1.11 billion ($8 million) necessary to equip the facility.

The burn unit will cater to a large number of patients from KP, newly merged tribal areas and those coming from neighbouring Afghanistan. The center will also help train health professionals to treat burn and trauma patients, enabling them to work independently at the district level.
Hundreds of people have died annually as no facilities were available in Peshawar to treat burn victims as result of incidents, domestic violence or bomb blasts.