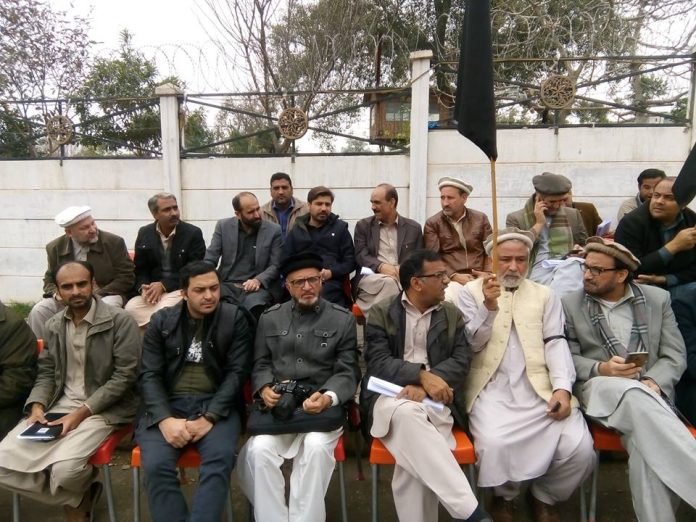 PESHAWAR— Journalists on Wednesday continued its protest demonstration against downsizing and censorship in media houses and non-payment of salaries to the media workers.

The protest demonstration was jointly organized by the Khyber Union of Journalists and Peshawar Press Club and attended by the elected members of the both body and other journalists.

The protesters journalists were demanding that federal and provincial government should hold owners and managements of TV channels and newspapers accountable who were sacking journalists and not paying salary to media staffs.

Instead of stopping salary of low-paid workers or firing them, the owners should reduce salary of those anchors and top executives of the media outlets who are taking hefty salary packages, they said.
“Hundreds of journalists and media workers have already lost their jobs and the government should not force them to take to the streets,” he cautioned”.

He said the ordeal faced by journalists and other media workers during the recent militancy when around 115 journalists lost their lives while performing their duties was compensated in the form of their retrenchment and downsizing.

The protesting journalists were chanting slogans against the incumbent government and media houses. They announced boycotting coverage of provincial Information Minister Shaukat Yousafzai and decided to file a petition at the Peshawar High Court against the terminations of media workers, and to seek stoppage of advertisements to media houses lying off employees.

The President Khyber Union of Journalists, Saifur Rehman Saifi said, down-sizing is artificial and only shakes some news agencies. Clarifying that this is one of the ways the government is using to control media and criticism; pro-government media houses are still receiving advertisements and making a profit, however media houses that have been critical of the establishment and the new government have seen a drastic drop in advert revenue.