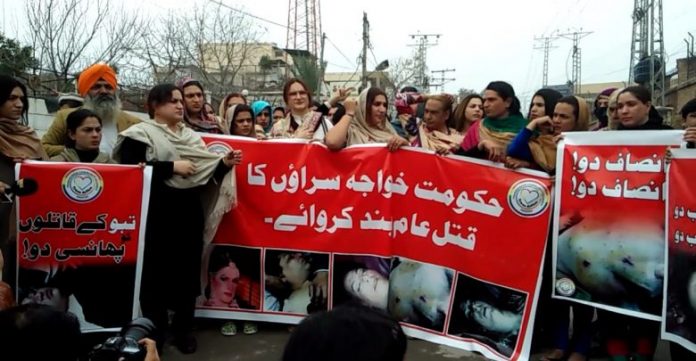 PESHAWAR— The transgender community on Monday staged a protest demonstration outside the Peshawar Press Club against killing of their colleague in district Karak days earlier.

As per details, a large number of transgender persons from Peshawar and Kohat districts, gathered outside Peshawar Press Club and shouted slogans against the police of not providing protection to them and arresting killer of Tabbu, who was killed in Karak after coming back to Kohat performing at a wedding ceremony in in Tehsil Banda Daud Shah.

The two others who were injured in the attack when unknown armed men opened firing on their car were identified as Mushtaq from Peshawar and Arshad from Swabi.
The protesters were carrying playcards and demanded immediate arrest of the accused.

The General Secretary and a transgender community leader in Peshawar, Arzoo said that there was a frightening rise in violence and hate crimes against transgender people in Khyber Pakhtunkhwa. “The brutal killing of transgender persons in the province has become a routine matter now. Almost every now and then, we get to hear such sad news,” she told this scribe in an interview”.

Taimor Kamal, a representative of Trans Action, told the scribe that 63 transgender persons had been killed across Khyber Pakhtunkhwa since 2015. However, none of the murderers was imprisoned so far. “Protection of a transgender person in the Khyber Pakhtunkhwa has become challenging and the government and police failed to provide them security” he deplored”. He further added there was no legislation for the transgender community in the province and the law was vague with regard to lodging of an F.I.R against the assailants and their medical treatment in the hospitals.