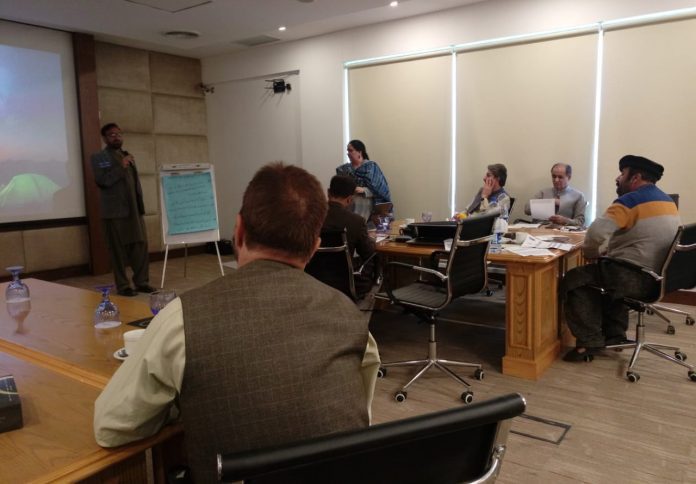 PESHAWAR: The Khyber Pakhtunkhwa’s Directorate of Human rights has decided to extend their offices to districts level to improve the plight of human rights in the province.
The KP’s Directorate of Human Rights will set up its offices in more than 14 districts of the province in order to protect and keep eyes on activities which may lead to human rights violations, said Mr. Ghazanfar Ali, who is the Director of Directorate of Human Rights, in a Seminar titled “KP Human Rights Policy and Role of Media “here in Peshawar on Thursday.
The daylong media Orientation workshop was jointly organized by the United Nations Development Programme and provincial Directorate of Human Rights which was attended by senior Journalists and media practitioners of the KP and its tribal district.
Speakers at the seminar hailed formulation of the Human Rights policy and urged on its effective implementation. Ghazanfar Ali said that his organisation’s primary responsibility was to monitor the human rights situation in the province and always strived to be side grieved party to improve level of justice in the society.
“We also proposed a bill seeking more powers including taking culprits into custody and imposition of fines,” he remarked adding directorate was striving to take initiatives for the harmonisation of legislation, regulation and practices with international human rights standards and national laws.
Rukhshanda Naz, Human rights activist, has told the participants that media can play an effective role in controlling human rights violation by educating and informing public about human rights laws, their rights and privileges. He said that Human Rights Policy had eight thematic areas that include women, children, civil and political rights, minorities, transgender persons, senior citizens, persons with disabilities and human rights defenders. Being plying role of human rights defenders, journalists are also facing challenges. He said provincial government should specifically legislate to provide protection for human rights defenders.
On the occasion, senior Journalists Shamim Shahid, Khyber Union of Journalists president Saiful Islam Saifi Ibrahim, Fareedullah Khan, Shams Mohmand, Waseem Ahmad Shah, and Gohar Ali called for close coordination among stakeholders for the protection and promotion of human rights and training workshops for journalists on human rights related laws and issues so they could create public awareness.