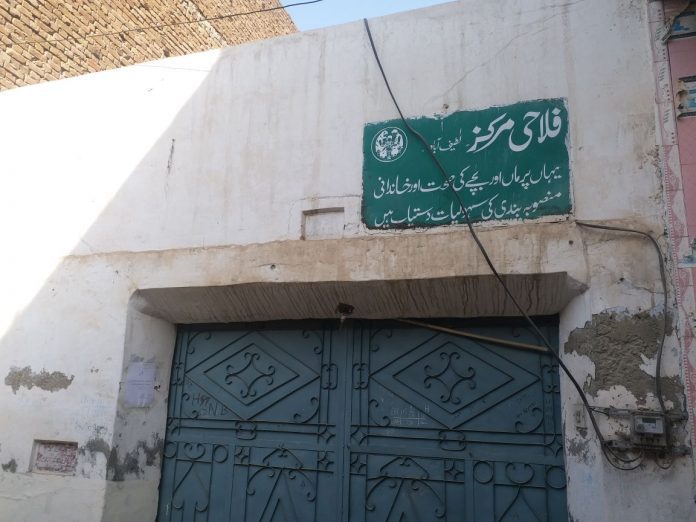 PESHAWAR: Population Welfare Center has shut down its another office in Peshawar after 19 years of providing treatment and consultation to women, citing lack of funds.
It is the fourth office of Population Welfare Center in provincial capital shutting down by the authorities in rents days.
The department don’t have the fund to pay salaries to its staffs and rent buildings, said officials. The owner of the building locked down the Population Welfare Center in Latif Abad area. According to officials, more than 40 women, mostly pregnant, were coming to center per day for consultation.
When contacted, the building owner Waqar Rehman said that the officer didn’t paid rent of the building for last one year. “The officials pay only Rs five thousand per month. I didn’t increase the amount as I wanted the center to work for the betterment of the women in the area. But they didn’t pay the rent for 12 months,” he said.
Five-member team of the center were also absent while the watchman of the center daily visits the center and on duty from 8 am to 2 pm.
Earlier, the officials of the population department were paying the rent after every six months with the cut of Rs 300 tax per month, but even than I didn’t kick out them because he wanted to allow the office to work for society. But now it’s inacceptable that department didn’t pay him the rent for the year of the 2017, he said while justifying why he shut down the building.
A local medicine shopkeeper said that during terror attack the department didn’t close the center; even they have threat of closer. The female visits even that time for consultation in this center but now it’s close down, that suffer the women of the area.
The population control department working as federal department since 1965 in different parts of the country but later in 1983 the center transfer to the provincial heath department of KP. Since 2010 after the 18 amendment the department and employees comes under the provincial government and more than three thousand employees are now working under health department.
Health department permitted Population center to work in Basic health unit, BHU in Peshawar district.
An High officer of the population department Peshawar, who didn’t want to show his name confirmed that more than 65 centers in working condition in provincial capital Peshawar, while 45 centers in rented building. He said that that more than three center of Bakhsshi Full, Latif Abad and Hazar Khawani were closed down because we have no funds for these rented building.
The officer admitted that in Peshawar 92 union council and we have only 65 center, half of them in rented building, so just imagine how much provincial government serious to control the population. According to him more than 3000 thousand are working in population department, but we have old vehicle, no official monitoring team, because we have no vehicle to check the activities of the population centers.
The district population department one of the department which controls through local government, after the local government the department faces problems in funds. The strange act of the provincial government is that an Annual development program there is no funds allocated for population department.
District population officer of Peshawar Mr Haleem said that we are facing problem of the funds, that’s why our three centers were shut down, he admitted that the funds of last year 2017 now he received from district government.
Mr. Haleem District Population officer of Peshawar confirmed that health department of KP department also ordered him to kick out their staff from seven centers which is now working in BHU. According to him the Khazana, Masho Gagr, Lala Kaly, Chamkani, Jagra and Dabgari center will closed down in coming ten days. Because district health officer warned me that population official takes room in BHU, which they need now, so I will close down these center also.
Mr. Haleem said that in last three-month Din Bahar, Mathra and Patwar area we also shut down centers which were working in BHU, these areas are located in Peshawar city.
DPO further added that two years before I submitted proposal about the new centers establishing in capital city Peshawar, but still it’s pending.
District Nazim of Peshawar Mr Arbab Asim didn’t know about the closer of the centers, asking about the centers he said that we also face problems in funds from federal government that’s why some center closed, but I release the funds of last year to department now and their issue will be resolved soon. According to the Arabab Asim we also face problem of funds, it’s not necessary that every department have separate building.
According to the census department of KP, in 1998 total population of the Peshawar was 2026851 while the current status of the population which was taken in 2017 is 4269079 person including male and female. That’s show how rapidly the population increase in capital city of Peshawar.