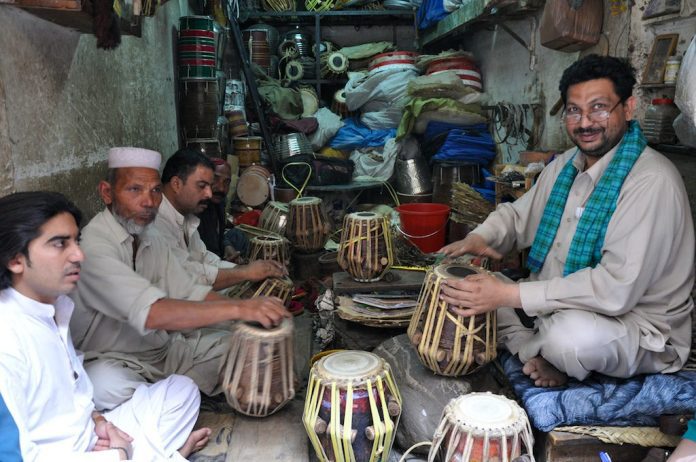 Mito Ustad and Chand Bhai are part of Ustad Raheem Baksh Family, they are brother and working still in Peshawar. Drum Maker always targeted by community in Peshawar, but they work with love and full dedication in Chitrali Market Peshawar.

Chitrali Market one of the old Bazaar in Qissa Khawani where Before Partition of indo Pakistan, mostly Artists lived and people attached with music stay in this market. Raheem Baksh one of the Drum Makers who was working there and he make Drum for Drummers and Drum making is source of income of Raheem Baksh Family.
After the partition of indo pak, the family continues work on Drum (Tabla) Making and now the two brother of Same Raheem Baksh Family continue their family work in Market. That’s and old and historical attached with Drum Making.

Tabla one of the musical instrument which mostly used in Pukhtoon Culture and the second most used instrument is Rabab, these instrument are make for local music, because people like Music in their Hujra, (Guest Houses). Mostly they used Tabla, Rabab for Music and pukhtoon community enjoy traditionally these two instruments.
Mito Ustad one of the Elder son of Raheem Baksh ustad , from his childhood he work with father for making drum ( Tabla ) and he have his own shop at Chitrali Bazaar Peshawar.

Talking about Tabla , Mito ustad said that its Art work and everyone have no ability to work on Drum Making ( Tabla ), if someone interested to work on Drum making side , he must know about the music , because through Tabla , he can create ( Sur ) Music , that touch the heartbeat of common people.

Mito Ustad said its Drum Making is difficult work, because in our Pukhtoon society everyone said, oh leave it this work, why not you work in different field. They don’t know our attachment with this field.
Drum making is an Art not a work, according to Mito Ustad I make one drum in three different phases, first I collect goat, cow lather for Drum also we need Special continents of steel for Tabla.

One Drum (Tabla) get more then 2 week and after that Tabla ready for sell. According to him General Zia Regime was hard for his people who attached with Drum Making but we work even in hard time, that’s why still we working in market. He said some people don’t like our work in market, because they don’t know about Drum, but we don’t mind.

Chand Bhai, the younger brother of Mito ustad, he also a Rabab Maker, which is mostly used in Pukthoon Music. He have knowledge of Music he said that traditionally people like to listen Rabab and Tabla , but now fast music change the mind of people , community have no time for gathering they used electronic guitar for music , but its true Rabab have different Music and people whose like it still listen the Music of Rabab.

These brothers working in local Market Peshawar, even terror activities low their work, but they like to work on his family work.