PESHAWAR: Access to clean drinking water is one of the basic and constitutional rights of every citizen of Pakistan, however the right is denied to people of Tank from decades who are forced to drink from the same rain fed ponds being used by animals. The people have to purchase drinking water which is beyond the power of a common man.

District Tank in Khyber Pakhtukhwa province is gateway to South Waziristan Agency and in South of Dera Ismail Khan consisting about 4 lac population. It is the second most backward district of KP after district Torgher out of a total 25 districts in the province.
The people of district Tank face the issue of drinking and useable water for decades and have to use rain fed pond water.

Areas including Jattatar, Gara Mito, Gara Baloch, Bara Khel, Ranwal, Khyber Kale, Kari Ahmad Shah, Gul Imam and some others have no facility of clean drinking water and consume rain water for cooking, drinking and washing purposes.
The north areas of the District Tank are fertile due to availability of mountainous water that comes in shape of a stream which starts from South Waziristan Agency and cover huge area in north of District Tank for drinking and irrigation purposes.
This water which is locally known as ‘Zam’ water reduces to a very low quantity when it reaches Kari Ahmad Shah an area one kilometer away from Tank city after fulfilling water need of different areas including FR Tank Jandola, Dabara, Chesan Kach. 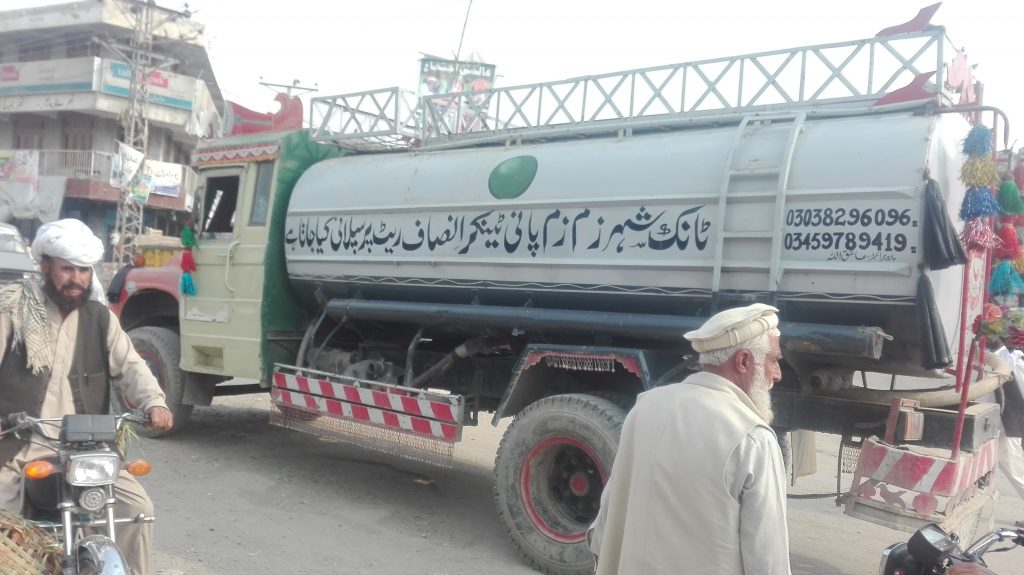 The stream water is stored in decades old three natural main ponds in Kari Ahmad Shah one kilometer from main city from where the water was being supplied to Tank city via pipelines laid by Englishmen before partition of sub-continent in 1947.

With the passage of a long time the pipeline got struck with sediment and broke from many places thus interrupting flow of water besides contaminating it at various points from where these pipelines were passing through drain lines.
Areas in north of Tank city included Jattatar, Gara Mito, Gara Baloch, Bara Khel, Ranwal, Cheehma, Manjhi Khel which is connected with Tehsil Kulachi of district DI Khan while Khyber Kale and Gul Imam are in East of Tank city and shared border with district Lakki Marwat.

These areas are located at a distance of about 3 to 25 kilometers from Tank city but were facing scarcity of water especially drinking water. The land of the same areas was barren due to the reason.

The underground water reservoirs are about 250 to 400 feet in these areas but since the nature of water is salty so it is not usable. People of these areas are forced to drink water from rain ponds available in these respective areas at a distance of one or half kilometer of villages.

The females especially bring water from these resources after covering long distance and carrying water pot on their head. They also wash clothes and kitchen utensils at the banks of these ponds which are also shared by animals whether domestic or wild.

Dabara area which is located about 16 kilometer in west of Tank city and that too at height. The area has enough underground drinking and clean water resources at 70 to 150 feet deep and could provide water to Tank and adjacent areas with less effort and resources to be polled the local experts said.

When contacted the Tehsil Municipal Officer Qudratullah Marwat said that 8 inch pipe that was laid 6 to 7 inch deep was providing water from Kari Ahmad Shah water ponds so far, adding these pipelines were laid during British rule and TMO have no outlay plan available about to pipeline to further distribute water to other parts of the city.
He said that there are 19 tube wells in main city in which 11 are functional while eight were not functional due to power loadshedding and technical problems.
A resident and shopkeeper, Irfan Ullah said that he visited three mosques for making ablution but did not find water.

The residents of even main Tank bazaar have been facing the issue and purchase water from tankers who are charging Rs 1800 to 3500 per tanker.

A local Journalist, Shafiq Kundi said that the residents pay Rs 1800 per tanker in main city while Rs 3500 for water supply to out of city.

Talking to this scribe, locals have called upon Pakistan Council for Scientific and Industrial Research (PCSIR) to conduct survey.
People complained that due to use of contaminated and pond water the waterborne diseases including abdominal are increasing in the area.
Health experts Dr Zainuddin said that bacterial contaminated water often cause enormous fatal diseases including Hepatitis, stomachache, typhoid, diarrhea.
Residents have called upon the National Institute of Health Pakistan to take measures for improving the standard of water-supply system in Tank district as well as ensure good quality of drinking water supply.

When contacted Pakistan Tehrik-e-Insaf MNA from Tank Dawar Khan Kundi, he said that he tried to resolve the long lasting issue of drinking water of the district but the provincial government did not. He alleged that the Chief Minister KP Pervez Khattak has no interest to resolve the problems of district Tank.
The elected JUI-F MPA Mahmood Bettani claimed to have resolved the longstanding water shortage issue as he has raised the issue on the floor of Assembly and Minister for Public Health Engineering Shah Farman Khan assured him to visit Tank in first week of July but did not yet.

The people of Tank recently have arranged a protest demonstration in front of Peshawar Press Club demanding that the Superintendent Engineer of Public Health Engineering Younis Khattak have stopped 19 tube wells and asking for commission.
It is to be noted that Tank Zam is the main source of water supply. The rainwater accumulated in Tank Zam is coursed through perennial water nullahs for irrigation and drinking purpose.

Former Tehsil Municipal Officer Hameed Ullah Marwat said that 80 percent people used Zam water. He said that it is impossible and we need to change the decades old main transmission pipelines.
He said that total there are total 17 tube wells in main city in which seven are functional but the others are dysfunctional due to low voltage of electricity and other problems.
The Public Health Engineering sources informed that there are total 121 tube wells in the whole district Tank in which 16 are non functional due to technical problems and low voltage as well as load shedding in the district.

The Minister for Public Health Engineering Shah Farman in a meeting assured the people to resolve the issue.
He said that 900 million rupees have been approved for need base in seven southern districts including Tank, DI Khan, Lakki Marwat, Bannu, Kohat, Karak and Hangu and would install solar system tube well to resolve the issue.
Water is the basic need of every human being and those at the helm of affairs should take care of it and make arrangements for provision of clean drinking water to masses.